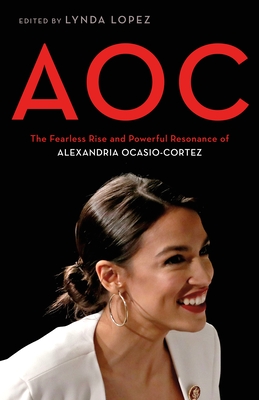 
With a preface by Keegan-Michael Key

In the vein of Notorious RBG, seventeen writers explore the multiple meanings of a young Latina politician who has already made history.

From the moment Alexandria Ocasio-Cortez beat a ten-term incumbent in the primary election for New York’s 14th, her journey to the national, if not world, stage, was fast-tracked. Six months later, as the youngest Congresswoman ever elected, AOC became one of a handful of Latina politicians in Washington, D.C. Just thirty, she represents her generation, the millennials, in many groundbreaking ways: proudly working class, Democratic Socialist, of Puerto Rican descent, master of social media, not to mention of the Bronx, feminist—and a great dancer.

AOC investigates her symbolic and personal significance for so many, from her willingness to use her imperfect bi-lingualism, to why men are so threatened by her power, to the long history of Puerto Rican activism that she joins. Contributors span a wide range of voices and ages, from media to the arts and politics:

Lynda Lopez is an Emmy-award winning journalist who has anchored and reported for ABC News, WCBS-TV and NewsRadio 880. Prior to joining 880, Lynda anchored for Fox 5 and My9 in New York and was a correspondent on VH-1. She was Mistress of Ceremonies for the 100 Hispanic Women organization's gala and for the Orphaned Starfish Foundation's annual fundraising galas. She is a former columnist for Latina Magazine and contributor to Glamour and Glam Belleza Latina. Lopez lives in New York City.

"AOC is a force to be reckoned with, and her story is one that will leave you inspired." —Kami Phillips, CNN

"As the book’s editor, Lopez has collected smart, briskly written and often inspiring essays about the Bronx-born Boricua phenom." —The Washington Post

"Urgent and timely... holds power by demonstrating the path that AOC has carved for so many of us who rarely saw ourselves in the leaders around us growing up...I recommend this book to anyone feeling downtrodden or weary with the state of the world." —Medium

"This anthology of essays explores everything about the living legend Alexandia Ocasio-Cortez—from her symbolic significance as a political figure to her contributions to a history of Puerto Rican activism." —Cosmo

"This book dives deep into [AOC’s] background, image, and ideas, and comes up with important insights." —Library Journal

"These essays not only emphasise what an important figure she is, but just how important it is to continue to follow her journey. Please read this book, especially if you want to understand why AOC is so relevant and meaningful to the communities she’s a champion for." —The Nerd Daily

"[N]ovelist Natalia Sylvester looks at Ocasio-Cortez in perhaps the most relatable light of them all: As a Latinx person navigating her relationship to the Spanish language." —Oprah Magazine