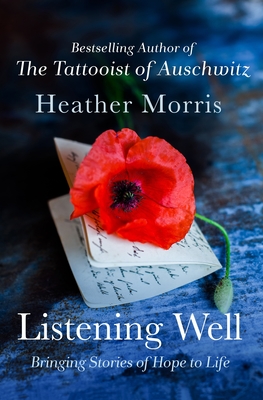 From New York Times bestselling author Heather Morris comes the memoir of a life of listening to others.

In Listening Well, Heather will explore her extraordinary talents as a listener—a skill she employed when she first met Lale Sokolov, the tattooist at Auschwitz-Birkenau and the inspiration for her bestselling novel. It was this ability that led Lale to entrust Heather with his story, which she told in her novel The Tattooist of Auschwitz and the bestselling follow up, Cilka's Journey.

Now Heather shares the story behind her inspirational writing journey and the defining experiences of her life, including her profound friendship with Lale, and explores how she learned to really listen to the stories people told her—skills she believes we can all learn.

"Stories are what connect us and remind us that hope is always possible."—Heather Morris

HEATHER MORRIS is a native of New Zealand, now resident in Australia. For several years, while working in a large public hospital in Melbourne, she studied and wrote screenplays, one of which was optioned by an Academy Award-winning screenwriter in the US. In 2003, Heather was introduced to an elderly gentleman who ‘might just have a story worth telling’. The day she met Lale Sokolov changed both their lives. Their friendship grew and Lale embarked on a journey of self-scrutiny, entrusting the innermost details of his life during the Holocaust to her. Heather originally wrote Lale’s story as a screenplay – which ranked high in international competitions – before reshaping it into her debut novel, The Tattooist of Auschwitz.

"In a heartfelt ... memoir, the author extols the act of listening as an expression of love and empathy ...A celebration of human connection." --Kirkus

"In this exquisite work, novelist Morris makes an impassioned case for the value of spoken history … Weaving spectacular storytelling with wise advice, this underscores the beauty of slowing down in an age of distraction."
--Publishers Weekly

"In the stirring follow-up to The Tattooist of Auschwitz, Morris tells the story of a woman who survives Auschwitz, only to find herself locked away again. Morris’s propulsive tale shows the goodness that can be found even inside the gulag."--Publishers Weekly

Praise for The Tattooist of Auschwitz:

“Based on a true story, the wrenching yet riveting tale of Lale’s determination to survive the camp with Gita is a moving testament to the power of kindness, ingenuity, and hope.” —People

“The Tattooist of Auschwitz is the story of hope and survival against incredible odds and the power of love.” —PopSugar

“The Tattooist of Auschwitz is an extraordinary document...I find it hard to imagine anyone who would not be drawn in, confronted and moved. I would recommend it unreservedly to anyone, whether they’d read a hundred Holocaust stories or none.” —Graeme Simsion, internationally-bestselling author of The Rosie Project