The Soul of Civility: Timeless Principles to Heal Society and Ourselves (Hardcover) 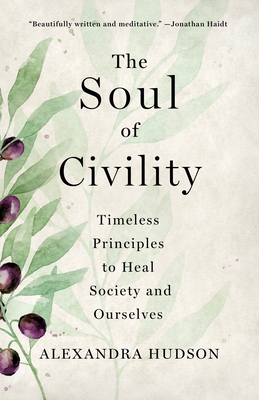 The Soul of Civility: Timeless Principles to Heal Society and Ourselves (Hardcover)

Alexandra Hudson, daughter of the "Manners Lady," was raised to respect others. But as she grew up, Hudson discovered a difference between politeness—a superficial appearance of good manners—and true civility. In this timely book, Hudson sheds light on how civility can help bridge our political divide.

From classical philosophers like Epictetus, to great twentieth-century thinkers like Martin Luther King Jr., to her own experience working in the federal government during one of the most politically fraught eras in our nation's history, Hudson examines how civility—a respect for the personhood and dignity of others—transcends political disagreements. Respecting someone means valuing them enough to tell them when you think they are wrong.

It’s easy to look at the divided state of the world and blame our leaders, the media, or our education system. Instead, we should focus on what we can control: ourselves. The Soul of Civility empowers readers to live tolerantly with others despite deep differences, and to rigorously protest wrongs and debate issues rather than silencing disagreements. A robust public discourse is essential to a truly civil society, and respecting others means telling hard truths. If enough of us decide to change ourselves, we might be able to change the world we live in, too.

Provocative, personal, and acutely relevant, The Soul of Civility is an essential book for our era.

ALEXANDRA O. HUDSON is a writer, popular speaker, and the founder of Civic Renaissance, a publication and intellectual community dedicated to beauty, goodness and truth. She was named the 2020 Novak Journalism Fellow, and contributes to Fox News, CBS News, The Wall Street Journal, USA Today, TIME Magazine, POLITICO Magazine, and Newsweek. She earned a master's degree in public policy at the London School of Economics as a Rotary Scholar, and is an adjunct professor at the Indiana University Lilly School of Philanthropy. She is also the creator of a series for The Teaching Company called Storytelling and The Human Condition, now available for streaming. She lives in Indianapolis, IN with her husband and children.

“Alexandra Hudson has written a remarkable book. The Soul of Civility unpacks the critical concept of civility, distinguishing it from mere politeness and explaining how it is as the core of our social life. It provides insight into writers and civilizations across time and space, and the ways that they are linked through this single idea. A worthwhile read.”—Francis Fukuyama, Stanford University

"Civility has become one of the most underrated ideas in contemporary America. Alexandra Hudson, in her elegant and articulate The Soul of Civility, is here to push it over the top once again."—Tyler Cowen, public intellectual, bestselling author, and founder of Marginal Revolution

"I need this book. And you do too."—Joel Stein, Los Angeles Times contributor and former TIME columnist

"Alexandra Hudson's The Soul of Civility offers pearls of philosophical wisdom and engaging historical anecdotes all woven into a compelling argument for rediscovering the virtue of civility. Her exploration of the distinction between mere politeness and genuine civility, and the centrality of civility to human flourishing, couldn't be more timely or needed."-- Donald Robertson, author of How to Think Like a Roman Emperor

"In The Soul of Civility, Lexi Hudson, one of the most original thought-leaders of her generation, plumbs the depths of American and classical thought on the centrality of a robust civic community in nurturing the habits of pluralistic democracy. This book should be at the top of the reading list for anyone who is eager to reconnect with a vital part of our heritage, and to rediscover a proven path to renewing America's social institutions." --Don Eberly, author of Restoring the Good Society and America's Promise

"[The Soul of Civility] is a book that needs to be written, at a moment in American history marked by deepening rancor and polarization, and by growing challenges to traditional norms of decency and civility. . . . [Hudson's] has the potential to influence public understanding of the compelling need for civil society in America." --George H. Nash, Ph.D., author of The Conservative Intellectual Movement Since 1945

"[Hudson] is a welcome voice of sanity and civility in an era of partisanship, panic, and pandemic. While most commentators are seeking to sow division during this time of cultural crisis, [Hudson] provides a hopeful vision for America’s future rooted in solidarity, neighborliness, and faith in our best traditions."--John A. Burtka, Executive Director & Acting Editor, The American Conservative

"We live in a divided moment where reasonable and clear thinking is urgently needed. Knowing that Alexandra Hudson is a leading voice in our public discourse and of her generation, I have hope for the future of our country."— Lee Hamilton, Democratic congressman from Indiana, founding board member of the National Institute for Civil Discourse

"Alexandra Hudson is a force of nature. Graceful in her prose and gracious in her spirit, she is the perfect author to tackle the topic of manners and civil society in our frequently ill-mannered and uncivil moment. She is a talented writer, an effective representative that will satisfy readers and play a vital role in a public conversation that is too often petty and mean."--Jim Antle, Editor, The Washington Examiner