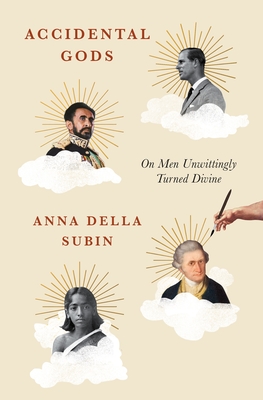 NAMED A BEST BOOK OF THE YEAR BY ESQUIRE, THE IRISH TIMES AND THE TIMES LITERARY SUPPLEMENT

Ever since 1492, when Christopher Columbus made landfall in the New World and was hailed as a heavenly being, the accidental god has haunted the modern age. From Haile Selassie, acclaimed as the Living God in Jamaica, to Britain’s Prince Philip, who became the unlikely center of a new religion on a South Pacific island, men made divine—always men—have appeared on every continent. And because these deifications always emerge at moments of turbulence—civil wars, imperial conquest, revolutions—they have much to teach us.

In a revelatory history spanning five centuries, a cast of surprising deities helps to shed light on the thorny questions of how our modern concept of “religion” was invented; why religion and politics are perpetually entangled in our supposedly secular age; and how the power to call someone divine has been used and abused by both oppressors and the oppressed. From nationalist uprisings in India to Nigerien spirit possession cults, Anna Della Subin explores how deification has been a means of defiance for colonized peoples. Conversely, we see how Columbus, Cortés, and other white explorers amplified stories of their godhood to justify their dominion over native peoples, setting into motion the currents of racism and exclusion that have plagued the New World ever since they touched its shores.

At once deeply learned and delightfully antic, Accidental Gods offers an unusual keyhole through which to observe the creation of our modern world. It is that rare thing: a lyrical, entertaining work of ideas, one that marks the debut of a remarkable literary career.

Anna Della Subin is a writer, critic, and independent scholar born in New York. Her essays have appeared in the New York Review of Books, Harper's, the New York Times, and the London Review of Books. A senior editor at Bidoun, she studied the history of religion at Harvard Divinity School. Accidental Gods is her first book.

"An irreverent bible in its own right, a sort of celestial thought experiment . . . On the one hand, Subin says, deification has been used to subjugate, to colonize, to oppress . . . But Subin also draws attention to deification’s emancipatory potential . . . A roving and ambitious book."
—Jennifer Szalai, The New York Times Book Review

"Who can make a god is as fascinating a question as who can kill one . . . Anna Della Subin writes beautifully of the spiritual life of marginalized people, taking their devotions seriously and revealing the subversive purpose and power of the beliefs and practices that their oppressors so often misunderstood . . . convincing . . . compassionate . . . compelling."
—The New Yorker

"With a stylish, playful, at times almost biblical authorial voice, as well as a keen eye for history’s most revealing paradoxes and charming cul-de-sacs, Subin restores to view . . . this dazzling pantheon of inadvertent deities."
—The New Republic

"Bracingly original . . . brilliant . . . irresistible . . . Though Accidental Gods wears its learning lightly and is tremendous fun to read, it also includes a series of lyrical and thought-provoking meditations on the largest of themes . . . As Subin’s rich, captivating book shows, religion is a symbolic act: though we cannot control the circumstances, we all make our own gods, for our own reasons, all the time."
—New York Review of Books

"Anna Della Subin has lit upon a startling strand in the history of the sacred . . . The book’s strength lies in the sensitivity of her analysis."
—Marina Warner, Times Literary Supplement

"Subin has a talent for digging up odd cul-de-sacs of thought that reveal the overall absurdity of colonial thinking and racist theology . . . Underneath the book's fascinating parade of ideas and historical snippets, the structure and sequencing are truly elegant . . . Powerful and persuasive."
—Daniel Hornsby, Bookforum

"We might think that divine fluidity is a thing of the past, but as Della Subin shows in this entertaining study, deification still occurs. With figures ranging from Douglas MacArthur . . . to Ras Tafari Makonnen . . . Accidental Gods instructs and delights."
—New Criterion (Critic's Pick)

"Accidental Gods is a book of history that sometimes reads like a poem, a rangy modernist one, with that tradition’s eye for imagery, juxtaposition, and paradox."
—Commonweal

"Subin doesn't cover QAnon or January 6, but reading her account of the global and historical power of the irrational, I became more and more convinced I might be reading the year's most relevant book about American politics."
—Tom Scocca, Air Mail

"Accidental Gods is a playful, ironic and ambiguous book about religion, at a time when religion . . . has grown as solemn as an owl. It’s no small achievement for Subin to have written something that, even as it explores the mostly grim religious dimensions of the colonial experience, does not reduce religion to politics but, to the contrary, leaves us hankering, like QAnon’s unlovely faithful, for a wider, wilder pantheon."
—The Telegraph

"A fascinating tour through the endless diversity of the divine . . . Each chapter takes a new deity as its subject, while drawing together a vast range of sources . . . to create beautiful passages of rhythmical prose."
—Guy Stagg, The Spectator

"A work so singular as to be nearly phosphorescent . . . Accidental Gods is . . .a writerly feat . . . The narrative cartwheels around time and space in a way that gives the impression of a rushing fever dream or a mystical vision. Yet Subin’s sentences are never blurry—they’re brisk, precise, and wondrously nimble, defying the staggering density of detail (historical, literary, weird, funny) that they carry."
—Ania Szremski, 4Columns

"Thought-provoking . . . Subin draws intriguing and illuminating connections between race and religion . . . A stimulating and challenging look at a fascinating historical phenomenon."
—Publishers Weekly

“Accidental Gods is the sly, smart, and gloriously impious chronicle of mortal men who were mistakenly deified by dint of their race, but also sometimes because of their money, their technology, their power. Anna Della Subin has written their bible, which, unlike the earlier testaments, doesn't found a religion, but dissolves one.”
—Joshua Cohen, author of Book of Numbers and The Netanyahus

“Accidental Gods relates, with tremendous intellectual ingenuity and resourcefulness, a new history of the modern world: how the quest for divine sanction and spiritual transcendence remain at the center of our ostensibly rational and secular political and economic struggles.”
—Pankaj Mishra, author of Bland Fanatics: Liberals, Race, and Empire

“In Accidental Gods Anna Della Subin has unearthed a startling, unexpectedly rich stratum of the sacred. Rich, witty, acerbic and often astonishing, Accidental Gods reveals how terror and divinity are intertwined—in the colonial enterprise, in present-day strong-leader cults, and in nationalist statecraft. A highly original, revelatory study, entertaining and sobering at once as it identifies a persistent danger: the mythopolitics that fails to distinguish between men and gods.”
—Marina Warner, author of Stranger Magic

“Accidental Gods opens new perspectives, shines new light on overlooked corners of our global history, and conveys its powerful messages at first quietly, in subtext, and then more and more explicitly. The tales told here by Anna Della Subin are often colorful and bizarre, often melancholy—oh, man’s repeated inhumanity to man!—but always enlightening and engrossing.”
—Lydia Davis, author of The Collected Stories and Essays One and Two