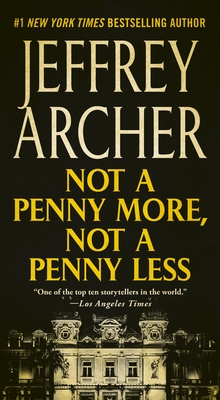 The thrilling novel that launched #1 New York Times bestseller Jeffrey Archer's career, Not a Penny More, Not a Penny Less.

THE SWINDLE IS INGENIOUS

The conned: an Oxford don, a revered society physician, a chic French art dealer, and a charming English lord. They have one thing in common. Overnight, each novice investor lost his life's fortune to one man. The con: Harvey Metcalfe. A brilliant, self-made guru of deceit. A very dangerous individual. And now, a hunted man.

SO IS THE REVENGE

With nothing left to lose, four strangers are about to come together—each expert in their own field. Their plan: find Harvey, shadow him, trap him, and penny-for-penny, destroy him. From the luxurious casinos of Monte Carlo to the high-stakes windows at Ascot to the bustling streets of Wall Street to fashionable London galleries, their own ingenious game has begun.

It's called revenge—and they were taught by a master.

JEFFREY ARCHER was educated at Oxford University. He served five years as a Member of Parliament in the House of Commons and has served twenty-seven years as a Member of the House of Lords. Now published in 97 countries and more than 37 languages, all of his novels and short story collections—including Kane & Abel, Only Time Will Tell and This Was a Man—have been international bestsellers. Jeffrey is married with two sons and three grandchildren, and lives in London, Cambridge and Majorca.