The Way Spring Arrives and Other Stories: A Collection of Chinese Science Fiction and Fantasy in Translation from a Visionary Team of Female and Nonbinary Creators (Hardcover) 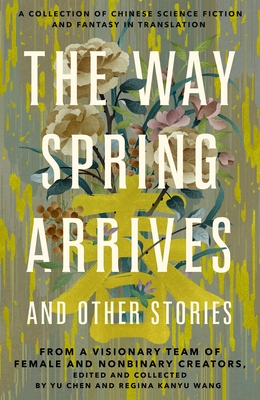 The Way Spring Arrives and Other Stories: A Collection of Chinese Science Fiction and Fantasy in Translation from a Visionary Team of Female and Nonbinary Creators (Hardcover)

From an award-winning team of authors, editors, and translators comes a groundbreaking short story collection that explores the expanse of Chinese science fiction and fantasy.

In The Way Spring Arrives and Other Stories, you can dine at a restaurant at the end of the universe, cultivate to immortality in the high mountains, watch roses perform Shakespeare, or arrive at the island of the gods on the backs of giant fish to ensure that the world can bloom.

Written, edited, and translated by a female and nonbinary team, these stories have never before been published in English and represent both the richly complicated past and the vivid future of Chinese science fiction and fantasy.

Time travel to a winter's day on the West Lake, explore the very boundaries of death itself, and meet old gods and new heroes in this stunning new collection.

Yu Chen has been working on the publication of science fiction and fantasy for almost ten years. She has planned and established an SFF column “Tales from Nowhere,” organized and participated a number of SFF forums, conventions, workshops and conferences, and published more than ten SFF books, including “Hospital Trilogy” by Han Song (Hospital, Exorcism and Revenant) and The New Wave of Chinese Science Fiction: History, Poetics and Text by Song Mingwei. Exorcism won the Best Original Book Award of the 29th Galaxy Award of Chinese Science Fiction.

Regina Kanyu Wang is a bilingual writer from Shanghai who writes both in Chinese and English. She has won the SF Comet international short story competition and multiple Xingyun Awards for Global Chinese SF. Her stories can be found in various magazines and anthologies, as well as her collections, Of Cloud and Mist 2.2 and The Seafood Restaurant. She is the cofounder of SF AppleCore and the Overseas Market Director of Storycom, and will soon join the CoFUTURES project at the University of Oslo to research contemporary Chinese science fiction by female creators.

"Essential reading for anyone interested in a fuller picture of Chinese fiction as a whole."—Booklist, starred review

"With this impressive anthology, Chen and Wang bring together the first English translations of 17 Chinese-language stories by female and nonbinary writers. . . . Offers much to chew on."—Publishers Weekly