Vanessa Jared's Got a Man: A Novel (Paperback) 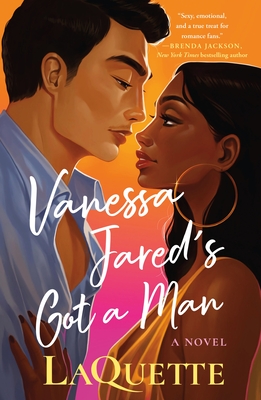 Vanessa Jared's Got a Man: A Novel (Paperback)

LaQuette's debut sexy romantic comedy Vanessa Jared's Got a Man tells the story of a woman getting her groove back and getting a second chance at love.

Vanessa Jared, a 40-something divorcee, decided that the best way to pull herself out of their post-divorce slump was to form The Savvy, Sexy, Singles Club and start the "Do Me" portion of her and her friends' lives.

But on the two year anniversary, a sexy sheriff shows up on Vanessa's doorstep wanting her to help him keep his little sister from marrying her no-good ex. Vanessa is not down for this at all. She wants nothing to do with her ex...until she spots a photo of her ex's new fiancee wearing her grandmother's ring--which he clearly stole from her. So now it's on. Vanessa is ready to take this trifling (fill-in-the-blank) down. What she does not expect is to fall in love along the way.

2021 Vivian Award finalist and DEIA activist in the romance industry, LaQuette writes sexy, stylish, and sensational romance. She crafts dramatic, emotionally epic tales that are deeply pigmented by reality’s paintbrush. This Brooklyn native’s novels--including Vanessa Jared's Got a Man--are a unique mix of savvy, sarcastic, brazen, and unapologetically sexy characters who are confident in their right to appear on the page.

A Library Journal Pick of The Month

“Vanessa Jared’s Got a Man is sexy, emotional and a true treat for romance fans.”—Brenda Jackson, New York Times bestseller of The House on Blueberry Lane

"LaQuette writes scrumptiously compelling stories--stories with raw reality and delicious fantasy all combined together in unputdownable reads. Her characters are brilliant, determined, and real, and their passion and drive will have you reading late into the night! You don't want to miss a LaQuette HEA!" --Sierra Simone, USA Today bestselling author of Priest and Misadventures of a Curvy Girl

"Smart, steamy and truly charming, Vanessa Jared's Got a Man is a heartwarming story about hope, second chances and finding love when you least expect it." - Sara Desai, author of The Singles Table