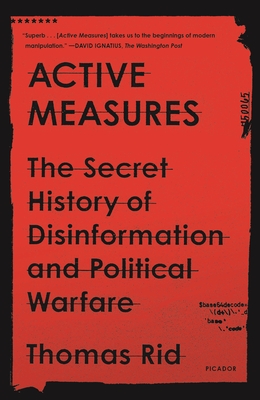 We live in the age of disinformation—of organized deception. Spy agencies pour vast resources into hacking, leaking, and forging data, often with the goal of weakening the very foundation of liberal democracy: trust in facts. Thomas Rid, a renowned expert on technology and national security, was one of the first to sound the alarm. More than four months before the 2016 election, he warned that Russian military intelligence was “carefully planning and timing a high-stakes political campaign" to disrupt the democratic process. But as crafty as such so-called active measures have become, they are not new.

The story of modern disinformation begins with the post-Russian Revolution clash between communism and capitalism, which would come to define the Cold War. In Active Measures, Rid reveals startling intelligence and security secrets from materials written in more than ten languages across several nations, and from interviews with current and former operatives. He exposes the disturbing yet colorful history of professional, organized lying, revealing for the first time some of the century’s most significant operations—many of them nearly beyond belief. A White Russian ploy backfires and brings down a New York police commissioner; a KGB-engineered, anti-Semitic hate campaign creeps back across the Iron Curtain; the CIA backs a fake publishing empire, run by a former Wehrmacht U-boat commander, that produces Germany’s best jazz magazine. Rid tracks the rise of leaking, and shows how spies began to exploit emerging internet culture many years before WikiLeaks. Finally, he sheds new light on the 2016 election, especially the role of the infamous “troll farm” in St. Petersburg as well as a much more harmful attack that unfolded in the shadows.

Active Measures takes the reader on a guided tour deep into a vast hall of mirrors old and new, pointing to a future of engineered polarization, more active and less measured—but also offering the tools to cut through the deception.

Thomas Rid is a professor at Johns Hopkins University. He testified on disinformation in front of the U.S. Senate Select Committee on Intelligence. He is also the author of Rise of the Machines: A Cybernetic History.

"Superb . . . Rid’s achievement in this book is that he places our crazy, upside-down politics in a coherent historical context . . . Rid provides the best narrative I’ve read anywhere of how the Russian disinformation campaign in 2016 was run . . . But the deeper value of Rid’s book is that it takes us to the beginnings of modern manipulation.” —David Ignatius, The Washington Post

“Elegant . . . The natural impulse is to see Russia’s attack in 2016—and the one it is surely preparing for 2020—as a radically new feature of our hyperconnected world . . . Yet Rid’s book is devoted to persuading us that it is in line with decades of history. In rich detail, Rid walks us through a hundred years of political warfare, recounting the exploits powers both major and minor inflicted on one another via the disinformation units of their intelligence agencies. Some of the stories are hair-raising.” —Jonathan Freedland, New York Review of Books

“Active Measures is predominantly an exercise in clarity, shining a light on covert operations and exposing the lies previously reported as truth. But it is at its most chilling when describing the disorientating complexities of unsolved operations.” —Helen Warrell, Financial Times

"Mr. Rid pulls important insights out of this tangled history." —The Economist

“Thomas Rid helps remind us how we reached this morass, one with antecedents reaching back to Czarist Russia and the Bolshevik revolution. To be sure, the US can use all the help it can get . . . America remains mired in a cold civil war. Active Measures is another book for such troubled times.” —Lloyd Green, The Guardian

“If forewarned is forearmed, then this highly readable account of the development of disinformation and political warfare should be in every intelligence professional’s library. It is required reading for those interested in understanding how the information they consume can be manipulated, and the potential effects that can be achieved. This book earns a prestigious four out of four trench coats.” —Rick Ledgett, The Cipher Brief

“A comprehensive history of disinformation . . . The best parts of the book are where Rid describes individual operations . . . The levels of detail in Active Measures’s Cold War-era case histories reflect the thoroughness of Rid’s research . . . Rid’s evaluation of internet-based operations’ effects also is spot on . . . [Active Measures] makes a convincing case that democratic societies need to take serious steps to confront and reduce the effects of disinformation and hostile influence operations.” —J. E. Leonardson, Studies in Intelligence (CIA in-house journal)

"Great, truly enlightening . . . The research for the book is extraordinary and the story is well told. I learned a ton I didn't know." —Jack Goldsmith, Henry L. Shattuck Professor of Law at Harvard University and author of In Hoffa's Shadow

"Excellent . . . Rid carefully shows that in their disinformation campaigns, Russian spies have made use of the media as a player in their operations. But then again, as Rid writes, so has the CIA." —Ben Makuch, VICE Motherboard

"Rid concludes this fascinating and well-researched history by warning of the need to take the challenge of misinformation seriously while being careful to not exaggerate its effects." —Lawrence D. Freedman, Foreign Affairs

“The prior century of Soviet and Russian influence campaigns directed against the United States and its allies . . . is laid out in crisp detail in Active Measures . . . [Rid] recounts elaborate and sometimes shocking tactics used to disinform democratic societies and inflame passions.” —Joe Carlson, Star Tribune (Minneapolis)

"A comprehensive and disturbing tour of the changing shape of disinformation over the last century." —Christian Science Monitor

“Covering a lot of ground in this dense but thorough account, Rid further includes primary sources that brilliantly show how 'information wars' have been waged throughout history . . . A fascinating read for those who appreciate learning about history within a complex political context.” —Jesse A. Lambertson, Library Journal (starred review)

"Engrossing . . . [Rid] provides an authoritative blow-by-blow of the hacking of the Democratic National Committee and Clinton campaign and the accompanying social media disinformation effort . . . Invaluable." —James Gibney, The American Scholar

"Revealing . . . There are plenty of clever, clandestine capers in Rid’s well-researched, briskly paced narrative, as well as shrewd analysis of the subtleties of making disinformation both damaging and believable, and the difficulty of knowing whether it is effective . . . Rid skillfully illuminates and demystifies this ballyhooed but much-misunderstood subject." —Publishers Weekly (starred review)

“Engaging . . . [A] highly relevant and useful study, especially as we approach the 2020 election.” —Kirkus

"The twentieth century was an era of deception, forgery, and made-up conspiracies concocted by the world's most formidable spy agencies. In the centuries thereafter, these same tactics will be turbo-charged and scaled to reach more people. In this groundbreaking book, Thomas Rid looks deep into neglected East European State Security archives, tracks down Cold War-era active measures officers, and examines fresh digital forensics in order to tell the true history of what we now know as disinformation. Active Measures is full of great stories that give contemporary events the historical context that has, until now, been missing." —Anne Applebaum, Pulitzer Prize-winning author of Gulag: A History

"Thomas Rid's timely Active Measures is an instant classic. He provides a comprehensive look at the political attacks we witnessed in 2016, and reminds us that deception and disinformation have deep historical roots. He also shows that the effects of active measures can be long-lasting, but can also boomerang on those who initiate them. As free societies look to defend against future deception campaigns, they will need to understand both the past and the new technologies that help to weaponize the practice in the present. Thomas Rid's excellent book is the best place to start." —John Sipher, former member of the Central Intelligence Agency's Senior Intelligence Service

"Thomas Rid, a recognized expert in information security, investigates the history of disinformation, taking us back to its modern origins. He tells a series of thrilling stories of how this subtle game was played by the founder of the Soviet secret police, his successors at the KGB, their Western counterparts, and contemporary Russian intelligence operators. Rid has produced a book that is destined to become a seminal work on the topic." —Andrei Soldatov, coauthor of The Red Web: The Kremlin's War on the Internet and The Compatriots: The Brutal and Chaotic History of Russia's Exiles, Émigrés, and Agents Abroad

"Active Measures provides a comprehensive look at the disinformation game, from the 1920s through the digital revolution. Thomas Rid gives the reader an insider’s view of how high-profile influence campaigns are designed and executed, thus providing historical perspective that can help us blunt the impact of disinformation. For that reason alone, Active Measures is a must-read." —Nada Bakos, former analyst and targeting officer at the Central Intelligence Agency