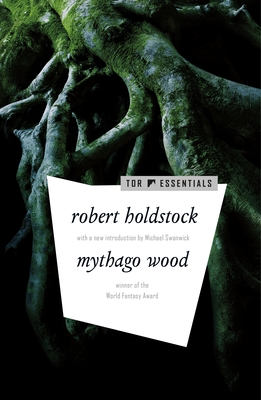 This is book number 1 in the The Mythago Cycle series.

Encounter myth and terror in the forest deeps in Robert Holdstock's Mythago Wood—a classic fantasy novel in The Mythago Cycle now available in a Tor Essentials edition, with a new introduction by Michael Swanwick.

The mystery of Ryhope Wood, Britain's last fragment of primeval forest, consumed George Huxley's entire long life. Now, after his death, his sons have taken up his work. But what they discover is numinous and perilous beyond all expectation.

For the Wood, larger inside than out, is a labyrinth full of myths come to life, "mythagos" that can change you forever. A labyrinth where love and beauty haunt your dreams...and may drive you insane.

"This is a winning novel with a fine feeling for the interface between airy dreams and sweaty reality."—Publishers Weekly

ROBERT HOLDSTOCK (1948-2009) was widely regarded as one of the greatest fantasists of his time. Mythago Wood (1984), the novel that made his reputation, won the World Fantasy and BSFA Awards. Among its several sequels, Lavondyss (1988) won the BFSA Award. His interest in Celtic and Nordic mythology was prominently reflected in his accalimed Merlin Codex trilogy, consisting of Celtika, The Iron Grail, and The Broken Kings, published between 2001 and 2007.

MICHAEL SWANWICK has received the Nebula, Theodore Sturgeon, World Fantasy and Hugo Awards, and has the pleasant distinction of having been nominated for and lost more of these same awards than any other writer. His novels include Stations of the Tide, Bones of the Earth, two Darger and Surplus novels, and The Iron Dragon's Mother. He has also written over a hundred and fifty short stories - including the Mongolian Wizard series on Tor.com - and countless works of flash fiction. He lives in Philadelphia with his wife, Marianne Porter.

“A classic of the literature of fantasy . . . Ryhope Wood [is], like so many other people and things, bigger and strangers and much more alive and dangerous the further you go.”—Neil Gaiman

“One of the defining fantasy novels of the last 50 years . . . A writer whose work matches the power of J.R.R. Tolkien, without being either a copy or a simple reaction.”—The Guardian

“A powerful and profound work of creation which I believe will be read, not merely in the present, but in a hundred years' time.”—Brian Aldiss

“Robert Holdstock's is one of the voices at the very heart of modern fantasy.”—Guy Gavriel Kay

“A writer of both heart and fire.”—The Times of London

“One of the strangest, most beautiful, and most compelling fantasies I have ever read. A marvel of a book.”—Keith Roberts