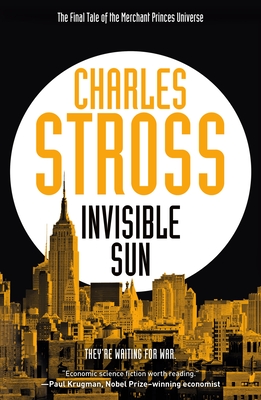 This is book number 3 in the Empire Games series.

The alternate timelines of Charles Stross’s Empire Games trilogy have never been so entangled as in Invisible Sun, the techno-thriller follow up to Dark State, as stakes escalate in a conflict that could spell extermination for humanity across all known timelines.

Two twin worlds are waiting for war. America is caught in a deadly arms race with the USA, its high-tech, parallel world. Yet it might just self-combust first. For its president-equivalent has died, leaving a crippling power vacuum. Without the First Man’s support, Miriam Burgeson faces a paranoid government opponent who he suspects of scheming to resurrect the American monarchy. And Miriam is indeed helping the exiled American princess. This is only to prevent her being used against America, but her rivals will twist anything to ruin her.

However, all factions will face a disaster bigger than anything they could imagine. In their drive to explore other timelines, high-tech America has awakened an alien threat. This force destroyed humanity on one version of earth—and if they don’t take action, it will do the same to both America and the USA.

CHARLES STROSS (he/him) is a full-time science fiction writer and resident of Edinburgh, Scotland. He has won three Hugo Awards for Best Novella, including for the Laundry Files tale “Equoid.” His work has been translated into over twelve languages. His novels include the bestselling Merchant Princes series, the Laundry series (including Locus Award finalist The Dilirium Brief), and several stand-alones including Glasshouse, Accelerando, and Saturn's Children.

Like many writers, Stross has had a variety of careers, occupations, and job-shaped catastrophes, from pharmacist (he quit after the second police stakeout) to first code monkey on the team of a successful dot-com startup (with brilliant timing, he tried to change employers just as the bubble burst) to technical writer and prolific journalist covering the IT industry. Along the way he collected degrees in pharmacy and computer science, making him the world’s first officially qualified cyberpunk writer.