The Art of War: The Classic Guide to Strategy: Essential Pocket Classics (Paperback) 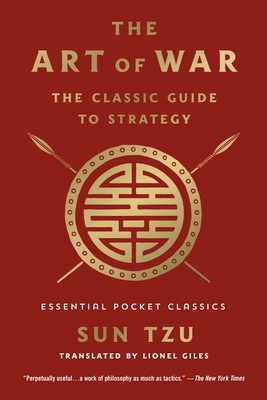 The Art of War: The Classic Guide to Strategy: Essential Pocket Classics (Paperback)

Originally written in the 5th century, The Art of War is a masterpiece of military strategy and Chinese philosophy that has influenced countless leaders, both on the battlefield and in the boardroom. The exhortations and advice from The Art of War have echoed throughout the centuries as pieces of timeless wisdom, no matter the foe you may be facing.

This edition of the timeless classic uses Lionel Giles’s brilliant translation of the original text, re-designed with a modern look and a pocket-size trim that’s perfect for gift giving. Whether they’re students or salespeople, readers everywhere will benefit from Sun Tzu’s profound insights into human behavior.

Sun Tzu was a Chinese general and military strategist who lived during the Eastern Zhou period of ancient China. He is credited with writing The Art of War, a study of battlefield tactics with profound insight into human nature that has influenced readers over millennia.

Lionel Giles was a British scholar, writer, and philosopher born in 1875. He was assistant curator at the British Museum and is best known for his translations of The Art of War and The Analects of Confucius.