Catholicism: A Global History from the French Revolution to Pope Francis (Hardcover) 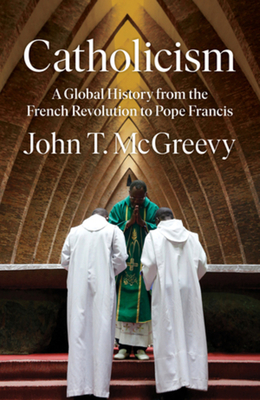 Catholicism: A Global History from the French Revolution to Pope Francis (Hardcover)

A magisterial history of the centuries-long conflict between “progress” and “tradition” in the world’s largest international institution.

The story of Roman Catholicism has never followed a singular path. In no time period has this been more true than over the last two centuries. Beginning with the French Revolution, extending to the Second Vatican Council in the 1960s, and concluding with present-day crises, John T. McGreevy chronicles the dramatic upheavals and internal divisions shaping the most multicultural, multilingual, and global institution in the world.

Throughout this essential volume, McGreevy details currents of reform within the Church as well as movements protective of traditional customs and beliefs. Conflicts with political leaders and a devotional revival in the nineteenth century, the experiences of decolonization after World War II and the Second Vatican Council in the twentieth century, and the trauma of clerical sexual abuse in the twenty-first all demonstrate how religion shapes our modern world. Finally, McGreevy addresses the challenges faced by Pope Francis as he struggles to unite the over one billion members of the world’s largest religious community.

John T. McGreevy is Provost and Professor of History at the University of Notre Dame and the award-winning author of three books on Catholicism and many essays. His work has been published in the Chronicle of Higher Education, the New York Review of Books, The New Republic, Commonweal, and other outlets. He lives in South Bend, Indiana.
[McGreevy] does a remarkable job of explaining how the epic struggle between reformists and traditionalists has led us to the present moment in the Roman Catholic Church.
— Tim Egan - New York Times

A gripping story of how one of the world’s most important institutions has evolved over the past two centuries. McGreevy spans the globe, from the Philippines to Indonesia to Canada, providing welcome polyphony to a story that can often feel hermetically European. We hear the voices of those who dedicated their lives to the poor; we hear the voices, too, of those who suffered at the hands of the Church. This is, by far, the best single-volume history of the modern Church currently available.
— James Chappel - Commonweal

This is an excellent book that thoroughly lives up to its ambitions. Given the hyper-specialization of so much academic history these days, the accomplishment here is even more notable: a readable, thorough and judicious treatment of a global institution over more than two centuries.
— Michael Sean Winters - National Catholic Reporter

One of [Catholicism’s] many strengths is the confidence to range across the world from Latin America to sub-Saharan Africa. Intellectually this would be a challenge for any historian, though McGreevy effortlessly guides us with a steady hand through this complex history over the last two centuries and more.

The power, the glory, the sin, and the sorrow—the whole Catholic saga is here, a cross-cultural story essential to modernity and to Faith itself.
— James Carroll, author of The Truth at the Heart of the Lie

If you want to understand the world, don’t ignore the history of its most global institution. John T. McGreevy exposes the paradoxes of the Church: an institution surprisingly adaptable to different cultures, riven by faction, yet called to common action. With admirable candor, impartiality, elegance, and economy, he tells a story of failings and faith.
— Felipe Fernández-Armesto, author of Out of Our Minds

Through vivid portraits and nuanced analysis of Catholic traditionalists and reformers, John T. McGreevy shows how persistent divisions within Catholicism have shaped as well as mirrored central conflicts in modern world history. Catholicism reveals why the Catholic church generates intense hatred and fierce loyalty, enraging conservatives by changing so much while frustrating progressives by changing so little. A landmark book.

In an epic about moral globalization since the French Revolution, John T. McGreevy narrates a quest for understanding and conversion, a tale of diasporas and missions. This is truly a majestic book.
— Jeremy Adelman, coauthor of Worlds Together, Worlds Apart

For those of us pained by how political divisions manipulate and distort Catholicism today, John T. McGreevy offers essential perspective and the mixed consolation that this is nothing new. His book unfolds an epic drama as power contends with democracy, authority with diversity, world with spirit
— Sister Helen Prejean, author of Dead Man Walking

A must-read for practicing Catholics and anyone interested in religious studies.
— Kirkus Reviews (starred review)