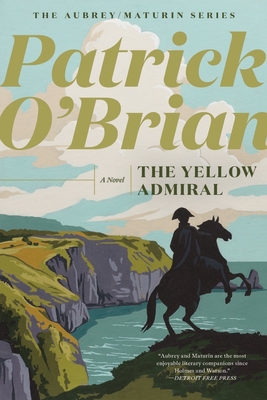 This is book number 18 in the Aubrey/Maturin Novels series.

"There are those already planning this afternoon's trip to the bookstore. Their only reaction is: Thank god, Patrick O'Brian is still writing. To you, I say, not a moment to lose."—John Balzar, Los Angeles Times

Life ashore may once again be the undoing of Jack Aubrey in The Yellow Admiral, Patrick O'Brian's best-selling novel and eighteenth volume in the Aubrey/Maturin series. Aubrey, now a considerable though impoverished landowner, has dimmed his prospects at the Admiralty by his erratic voting as a Member of Parliament; he is feuding with his neighbor, a man with strong Navy connections who wants to enclose the common land between their estates; he is on even worse terms with his wife, Sophie, whose mother has ferreted out a most damaging trove of old personal letters. Even Jack's exploits at sea turn sour: in the storm waters off Brest he captures a French privateer laden with gold and ivory, but this at the expense of missing a signal and deserting his post. Worst of all, in the spring of 1814, peace breaks out, and this feeds into Jack's private fears for his career.

Fortunately, Jack is not left to his own devices. Stephen Maturin returns from a mission in France with the news that the Chileans, to secure their independence, require a navy, and the service of English officers. Jack is savoring this apparent reprieve for his career, as well as Sophie's forgiveness, when he receives an urgent dispatch ordering him to Gibraltar: Napoleon has escaped from Elba.

One of our greatest contemporary novelists, Patrick O’Brian is the author of the twenty volumes of the best-selling Aubrey/Maturin series, as well as many other books, including Testimonies, The Golden Ocean, The Unknown Shore, and biographies of Joseph Banks and Picasso.
The experience of reading O'Brian is that of gracious acceptance at one of the banquets of life's feast…It's hard not to find him irresistible.
— Commonweal

O'Brian is at the top of his elegant form here…This is splendid storytelling from a true master.
— Publishers Weekly (starred review)

I haven’t read novels [in the past ten years] except for all of the Patrick O’Brian series. It was, unfortunately, like tripping on heroin. I started on those books and couldn’t stop.
— E. O. Wilson - Boston Globe

Aubrey and Maturin are the most enjoyable literary companions since Holmes and Watson.
— Detroit Free Press

If there were 17 more novels, I'd start today.
— Donald Graham - Wall Street Journal

Taken as a whole, the Aubrey/Maturin novels are by a long shot the best things of their kind, so much better than the competition that comparisons long ago ceased to be relevant: they are uniquely excellent.
— New York Times Book Review