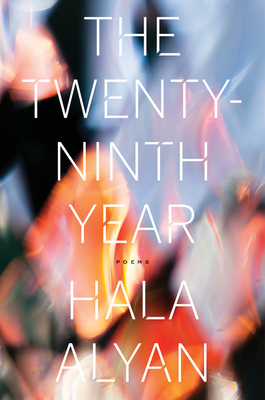 
Not On Our Shelves—Ships in 1-5 Days
Wild, lyrical poems that examine the connections between physical and interior migration, from award-winning Palestinian American poet, novelist, and clinical psychologist Hala Alyan, author of Salt Houses.

For Hala Alyan, twenty-nine is a year of transformation and upheaval, a year in which the past—memories of family members, old friends and past lovers, the heat of another land, another language, a different faith—winds itself around the present.

Hala’s ever-shifting, subversive verse sifts together and through different forms of forced displacement and the tolls they take on mind and body. Poems leap from war-torn cities in the Middle East, to an Oklahoma Olive Garden, a Brooklyn brownstone; from alcoholism to recovery; from a single woman to a wife. This collection summons breathtaking chaos, one that seeps into the bones of these odes, the shape of these elegies.

A vivid catalog of heartache, loneliness, love and joy, The Twenty-Ninth Year is an education in looking for home and self in the space between disparate identities.
HALA ALYAN is the author of the novel Salt Houses, winner of the Dayton Literary Peace Prize and the Arab American Book Award and a finalist for the Chautauqua Prize, as well as the novel The Arsonists’ City and four award-winning collections of poetry, most recently The Twenty-Ninth Year. Her work has been published by TheNew Yorker, the Academy of American Poets, Literary Hub, the New York Times Book Review, and Guernica. She lives in Brooklyn with her husband, where she works as a clinical psychologist.

A Rumpus Most Anticipated of 2019 Pick   "In poem after poem, there is raw emotion, straightforward storytelling, and unapologetic truth. The poems here read like scars...sometimes they are up-front and easily understood. Sometimes they show up sporting shattered lines or jump from one memory to the next, making you think of a bird that abruptly changes direction mid-flight after hearing a gunshot. That intimate feeling is hard to find, and Alyan offers it here in spades." –NPR   "Best exemplifies poetry’s hybridity...blends forms, tangles modes, travels through time and space and leaps from the intensely personal to the acerbically political...with scathing wit, fierce self-examination, and challenging syntax. Alyan takes great risks, drips her full, naked self onto the page, and inspires her readers to embrace and examine our gravest mistakes, for every part of ourselves is a piece of a complicated puzzle that we can’t — mustn’t — stop trying to solve."–Vulture, "4 Poetry Collections That Change the World"   "This is the stuff of life, the very essence of the poetic." –LitHub, "Most Anticipated Books of 2019"   "There exists, within her poems, the cacophony that pervades our most intimate of relationships, a glistering sheen covering even the most banal interactions. Her poems feel as familiar as the prayers we make up in our own minds, as we feverishly ask for that which we’re only just realizing that we want; they’re a quiet triumph, sacred and profane, and, most of all, grounded in humanity." –Nylon, "Best New Books"   "Alyan’s fourth book of poems arrives with the earnest ambition of a debut, but the care of a poet whose lines have earned their sentiment. Poems of sorrow and shame live next to verses of desire. The Twenty-Ninth Year bursts with lamentations, hopes, fears, and a weary but wide faith." –The Millions, "Must Read Poetry" "Searching...Alyan writes propulsively." –amNewYork, "5 New Standout Poetry Books?" "Alyan moves with grace and courage in her poems, especially in her bare descriptions of a battle with anorexia, the relationship between father and daughter, and the stark realizations she depicts of a young girl tugged between her family's past and a life of American fast food restaurants where she's told how she doesn't fit in. This is coming-of-age poetry from a voice that resists categorization." –Library Journal, starred review   “[A] truly stellar collection of poetry…. If the collection wants for anything, it’s that each poem offers only a glimpse or a moment, whereas the subject matter could sustain several more pages of vicious, gripping verse. Luckily, readers can dive into the rest of Alyan’s burgeoning oeuvre: another three books of poetry and a critically acclaimed novel, Salt Houses (2017).”—Booklist, starred review   "The past never truly dies in this searing fourth collection from Alyan (Salt Houses), it merely resurfaces in the form of battle scars and familial wounds. The Palestinian-American poet, novelist, and clinical psychologist weaves an ever-shifting narrative that chronicles the personal history that shapes and informs her present. The inheritance of displacement is pervasive, as Alyan describes, and her lines are prone to linger in the minds of readers just like the ghosts that haunt the work itself." &nda —