Ghosts Of Gold Mountain: The Epic Story of the Chinese Who Built the Transcontinental Railroad (Hardcover) 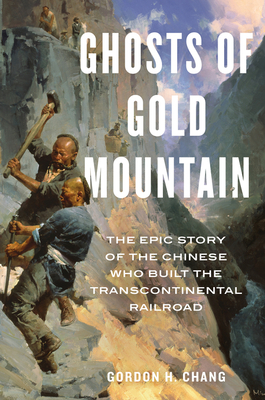 Ghosts Of Gold Mountain: The Epic Story of the Chinese Who Built the Transcontinental Railroad (Hardcover)


Special Order—Subject to Availability
“Gripping… Chang has accomplished the seemingly impossible… he has written a remarkably rich, human and compelling story of the railroad Chinese.”—Peter Cozzens, Wall Street Journal

A groundbreaking, breathtaking history of the Chinese workers who built the Transcontinental Railroad, helping to forge modern America only to disappear into the shadows of history until now.

From across the sea, they came by the thousands, escaping war and poverty in southern China to seek their fortunes in America. Converging on the enormous western worksite of the Transcontinental Railroad, the migrants spent years dynamiting tunnels through the snow-packed cliffs of the Sierra Nevada and laying tracks across the burning Utah desert. Their sweat and blood fueled the ascent of an interlinked, industrial United States. But those of them who survived this perilous effort would suffer a different kind of death—a historical one, as they were pushed first to the margins of American life and then to the fringes of public memory.

In this groundbreaking account, award-winning scholar Gordon H. Chang draws on unprecedented research to recover the Chinese railroad workers’ stories and celebrate their role in remaking America. An invaluable correction of a great historical injustice, Ghosts of Gold Mountain returns these “silent spikes” to their rightful place in our national saga.

“The lived experience of the Railroad Chinese has long been elusive... Chang’s book is a moving effort to recover their stories and honor their indispensable contribution to the building of modern America.”—The New York Times
GORDON H. CHANG is the Olive H. Palmer Professor in Humanities and Professor of History at Stanford University, where he also serves as director of the Center for East Asian Studies and codirector of the Chinese Railroad Workers in North America Project. In addition to Ghosts of Gold Mountain, Chang is the author of three other books, including Fateful Ties, and editor of six more. He lives in Stanford, California.

WINNER OF THE ASIAN/PACIFIC AMERICAN AWARD FOR LITERATURE  WINNER OF THE CHINESE AMERICAN LIBRARIANS ASSOCIATION BEST BOOK AWARD    “Gripping… Chang has accomplished the seemingly impossible… he has written a remarkably rich, human and compelling story of the railroad Chinese.”—Peter Cozzens, Wall Street Journal   “The lived experience of the Railroad Chinese has long been elusive... Chang’s book is a moving effort to recover their stories and honor their indispensable contribution to the building of modern America.”—The New York Times   “A valuable contribution to the history of the Chinese in North America.”—Kirkus Reviews   “Ambitious…[Chang’s] writing is vibrant and passionate.”—Publishers Weekly    “This epic account will stand as the definitive history of how Chinese laborers, including members of my own family, did monumental work under some of the most difficult physical circumstances imaginable on a project that would eventually transform our country. Fascinating and heart-breaking, Ghosts of Gold Mountain is a must read.” — Lisa See, New York Times best-selling author of On Gold Mountain and Snow Flower and the Secret Fan     “Under Gordon Chang’s inspired pen, the unheralded contribution of Chinese laborers in building America’s first transcontinental railroad bursts into daylight like a mighty locomotive rushing from a mountain tunnel. These ‘Railroad Chinese’ left a rich legacy of herculean construction throughout the American West, and by ably sifting through frequently elusive sources, Dr. Chang brings their individual stories and culture into illuminating focus.” — Walter R. Borneman, author of Iron Horses: America’s Race to Bring the Railroads West     “America is forever indebted to the roughly twenty thousand Chinese workers who built the western portion of the Transcontinental Railroad. Yet their momentous journeys, their dreams and travails, the racism that they endured, and their ultimate triumphs and tragedies have remained only dimly understood and recognized until now. Gordon Chang has finally told their story in a vivid, insightful, and deeply human way.” — Andrés Reséndez, author of The Other Slavery   “Ghosts of Gold Mountain is a treasure trove of stories, and of exciting scholarship that answers questions many of us have asked for decades. In this profound and inspiring book, Chang reveals at last how the West was truly won: by Railroad Chinese who literally united these American states.” — David Henry Hwang, author of the Tony Award-winning play M. Butterfly     “Gordon Chang leaves no boulder unturned, nor tunnel unexplored, as he brings vital detail to the lives of the Chinese railroad workers: ‘ghosts’ who are no longer missing in history, thanks to his meticulous research. After a hundred and fifty years, this book sets the record straight.” — Helen Zia, author of Last Boat out of Shanghai —