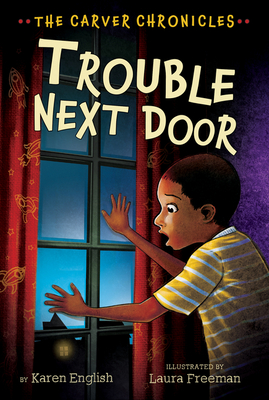 This is book number 4 in the The Carver Chronicles series.

“A pleasing addition to a series in which diverse readers can recognize themselves in starring roles.” —Kirkus Reviews

“Another warm and approachable outing with the [Carver School] gang.” —The Bulletin

Third-grader Calvin is dealing with his next-door neighbors moving away—and the school bully moving in. Meanwhile, competition at the school science fair is heating up, and Calvin must decide what to do when his data doesn't prove his theory. This lively installment in a chapter book series about a diverse group of elementary schoolers offers spot-on storytelling, relatable characters and situations, and plenty of action.

Karen English is a Coretta Scott King Honor Award-winner and the author of It All Comes Down to This, a Kirkus Prize Finalist, as well as the Nikki and Deja and The Carver Chronicles series. Her novels have been praised for their accessible writing, authentic characters, and satisfying storylines. She is a former elementary school teacher and lives in Los Angeles, California.

Laura Freeman has illustrated several books for young readers, including the Nikki and Deja and Carver Chronicles series, and Natalie's Hair Was Wild, which she also wrote. Laura grew up in New York City, and now lives in Atlanta, Georgia, with her husband and two children. www.lfreemanart.com Instagram: @laurafreemanart Twitter: @LauraFreemanArt.

"...it’s the realistic portrayal of Calvin’s emotions and his struggles to understand Harper that make this early chapter book so very readable." —Booklist   "Freeman’s black and white spot art is cute without being cartoony, catching reality in the slouch of a kid over a gaming console or the glare of a girl about to get reported to the teacher. Readers following the Carver School students will appreciate another warm and approachable outing with the gang." —Bulletin   "...Carver is a welcoming, multicultural place. Chronicling the importance of empathy and openness, this fourth in the Carver Chronicles is a pleasing addition to a series in which diverse readers can recognize themselves in starring roles." —Kirkus  Praise for The Carver Chronicles     "Many independent readers, particularly boys, will identify with these . . . appealing and likeable characters."—Kirkus   "A much-needed story in which African American boys can see themselves reflected in a positive light, completely free of the usual tropes."—Booklist   "Chapter book readers have few options if they want to read about urban boys of color; here's hoping for more.”—The Horn Book —