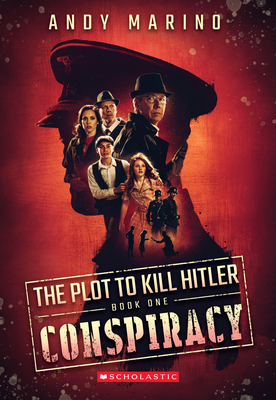 This is book number 1 in the The Plot to Kill Hitler series.

Based on the real-life scheme to take down one of history's greatest monsters, this heart-pounding trilogy puts two courageous kids at the center of the plot to kill Adolf Hitler.

Berlin, November 1943. With bombing raids commencing, the city is blanketed by explosions.

Siblings Gerta and Max Hoffmann live a surprisingly carefree childhood amid the raids. Berlin is a city going about its business, even as it's attacked almost nightly.

But one night, the air raid sirens wail, and the Hoffmanns' neighborhood is hit. A mortally wounded man comes to their door, begging to be let in. He asks for Karl Hoffmann, their father. Gerta and Max watch as Karl tries in vain to save the man's life.

Before he dies, the stranger gives their father a bloodstained packet of documents, along with a message: "For the sake of humanity, the Führer must die. Finish it, Karl!"

Based on real events, this is the story of two children swept up in a fight for the soul of Germany -- and the world.

Andy Marino was born and raised in upstate New York. He spent his childhood orchestrating Lego pirate battles, drawing detailed maps of imaginary video games, and cheating death in Choose Your Own Adventure books. Profoundly influenced by the work of J.R.R. Tolkien, Andy started writing his first novel at the age of eleven. Tragically, THE RUNES OF ILLIARM was never completed. For books that were, visit Andy online at andy-marino.com.