Rise Up!: Broadway and American Society from 'Angels in America' to 'Hamilton' (Paperback) 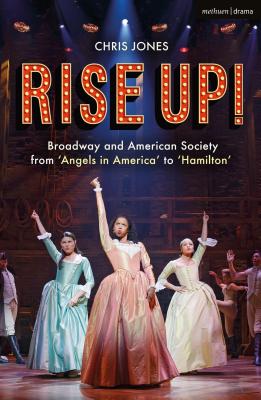 Rise Up!: Broadway and American Society from 'Angels in America' to 'Hamilton' (Paperback)

Penned by one of America's best-known daily theatre critics and organized chronologically, this lively and readable book tells the story of Broadway's renaissance from the darkest days of the AIDS crisis, via the disaster that was Spiderman: Turn off the Dark through the unparalleled financial, artistic and political success of Lin-Manuel Miranda's Hamilton.

It is the story of the embrace of risk and substance. In so doing, Chris Jones makes the point that the theatre thrived by finally figuring out how to embrace the bold statement and insert itself into the national conversation - only to find out in 2016 that a hefty sector of the American public had not been listening to what it had to say. Chris Jones was in the theatres when and where it mattered. He takes readers from the moment when Tony Kushner's angel crashed (quite literally) through the ceiling of prejudice and religious intolerance to the triumph of Hamilton, with the coda of the Broadway cast addressing a new Republican vice-president from the stage. That complex performance - at once indicative of the theatre's new clout and its inability to fully change American society for the better - is the final scene of the book.
Chris Jones is the longtime chief theater critic and Sunday culture columnist of the Chicago Tribune, where he has been on staff since 2002. Throughout the 1990s, he covered Broadway and its tours for Variety. He is author of Bigger, Brighter, Louder: 150 Years of Chicago Theater (2013) and his work has appeared often in the New York Times, Washington Post, Los Angeles Times, and many other publications. Jones read Drama at the University of Hull, UK, and has a PhD from The Ohio State University. In 2011, Jones was named by American Theater magazine as one of the most influential theater critics in America. In 2014, he became the director of the Eugene O'Neill Theater Center's National Critics Institute in Waterford, Connecticut. Jones is a winner of the George Jean Nathan Award for Dramatic Criticism, the most prestigious honour for drama critics in the United States.