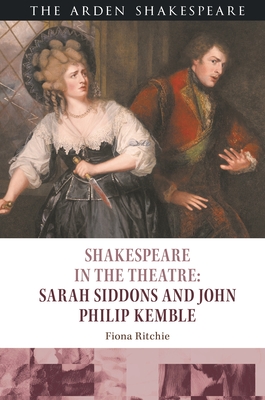 Siblings Sarah Siddons (1755-1831) and John Philip Kemble (1757-1823) were the most famous British actors of the late-18th and early-19th centuries. Through their powerful acting and meticulous conceptualisation of Shakespeare's characters and their worlds, they created iconic interpretations of Shakespeare's major roles that live on in our theatrical and cultural memory. This book examines the actors' long careers on the London stage, from Siddons's debut in 1782 to Kemble's retirement in 1817, encompassing Kemble's time as theatre manager, when he sought to foreground their strengths as Shakespearean performers in his productions.

Over the course of more than thirty years, Siddons and Kemble appeared opposite one another in many Shakespeare plays, including King John, Henry VIII, Coriolanus and Macbeth. The actors had to negotiate two major Shakespeare scandals: the staging of Vortigern - a fake Shakespearean play - in 1796 and the Old Price Riots of 1809, during which the audience challenged Siddons's and Kemble's perceived attempts to control Shakespeare. Fiona Ritchie examines the siblings' careers, focusing on their collaborations, as well as placing Siddons's and Kemble's Shakespeare performances in the context of contemporary 18th- and 19th-century drama. The volume not only offers a detailed consideration of London theatre, but also explores the importance of provincial performance to the actors, notably in the case of Hamlet - a role in which both appeared across Britain and in Ireland.
Fiona Ritchie is Associate Professor of Drama and Theatre in the Department of English at McGill University, Montreal, Canada. She is the author of Women and Shakespeare in the Eighteenth Century (2014) and the co-editor (with Peter Sabor) of Shakespeare in the Eighteenth Century (2012). She has published articles in journals including Shakespeare Survey, Borrowers and Lenders: The Journal of Shakespeare and Appropriation, and Literature Compass