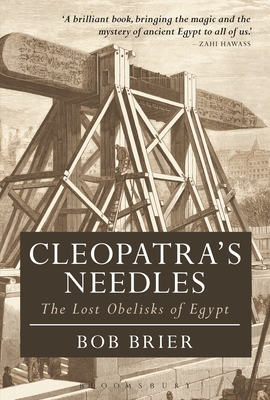 In the half-century between 1831 and 1881 three massive obelisks left Egypt for new lands. Prior to these journeys, the last large obelisk moved was the Vatican obelisk in 1586 - one of the great engineering achievements of the Renaissance. Roman emperors moved more than a dozen, but left no records of how they did it. The nineteenth-century engineers entrusted with transporting the obelisks across oceans had to invent new methods, and they were far from certain that they would work. As the three obelisks, bound for Paris, London and New York, sailed towards their new homes, the world held its breath. Newspapers reported the obelisks' daily progress, complete with dramatic illustrations of the heroic deeds of the engineers and crews struggling under nearly impossible conditions. When the obelisks finally arrived safely in their new homes, bands played Cleopatra's Needle Waltz and silver obelisk pencils dangled from fashionable ladies' necks.

This turbulent era, caught up in obelisk mania, is recreated by Bob Brier in all its glory. Amid astounding tales of engineering dexterity and naval endurance, the individuals involved in transporting the obelisks and receiving them in their future homes are brought to life through their letters and diaries, newspaper articles and illustrations. Written by a renowned Egyptologist and author, this compelling book will fascinate all those interested in Egypt, its iconic monuments and the history of great endeavour.
Bob Brier is Senior Research Fellow at Long Island University, USA, and is a world-famous Egyptologist. He is the author of The Murder of Tutankhamen, Ancient Egyptian Magic, Egyptian Mummies, and Secret of the Great Pyramid. He was host to TLC's documentary series The Great Egyptians, The World of Pyramids, and Mummy Detective.