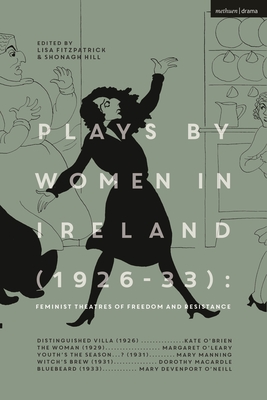 This anthology provides access to neglected theatrical work and broadens our understanding of the history of Irish theatre as well as the vital role of women within it. The introduction places these plays in dialogue with one another as well as within the national context of the repealing of women's rights during the Irish Free State years.

These are plays by authors including Mary Manning, Dorothy Macardle, Mary Devenport O'Neill, Kate O'Brien and Margaret O'Leary, which are difficult to access, but which are increasingly visible in Irish theatre scholarship. This unique collection places the playwrights in dialogue to form a tradition of women's theatrical work that challenges the male-dominated literary canon of Irish theatre, as well as enriching the body of women's theatrical work in the Anglophone world during the interwar years. Includes the plays:
Kate O'Brien - Distinguished Villa (1926)
Margaret O'Leary - The Woman (1929)
Mary Manning - Youth's the Season (1931)
Dorothy Macardle - Witch's Brew (1931)
Mary Devenport O'Neill - Bluebeard (1933)
Dr Lisa Fitzpatrick has published extensively on performance and violence, post-conflict theatre, and gender, and has been funded by the British Academy and the Canadian High Commission. She has been an invited speaker at a number of events, including the International Association for the Study of Irish Literatures (IASIL), the Warwick Politics and Performance Network, and the Irish Theatrical Diaspora project. She convened the conference The North: Exile, Diaspora, Troubled Performance, in Derry in 2012 and worked with the Derry Playhouse on the International Culture Arts Network Festival in Derry in 2013. She is a founding member of the Irish Society for Theatre Research, and is co-convener of the IFTR Feminist Working Group. She is the author of Rape on the Contemporary Stage (Palgrave, 2018), and her research is on the participation of women in the Northern Ireland conflict. Dr Shonagh Hill is the author of Women and Embodied Mythmaking in Irish Theatre (Cambridge University Press, 2019): the first monograph to provide an historical overview of women's contributions to, and thus an alternative genealogy of, modern Irish theatre. Shonagh has been awarded the prestigious Marie Sklodowska-Curie Fellowship (2020-2022) for her project Generational Feminisms in Contemporary Northern Irish Performance at Queen's University, Belfast. Shonagh has published articles on women and Irish theatre in a range of leading journals and internationally reviewed books, and is engaged in national and international scholarly communities through membership of the Irish Society for Theatre Research, the International Association for the Study of Irish Literatures and the International Federation for Theatre Research.