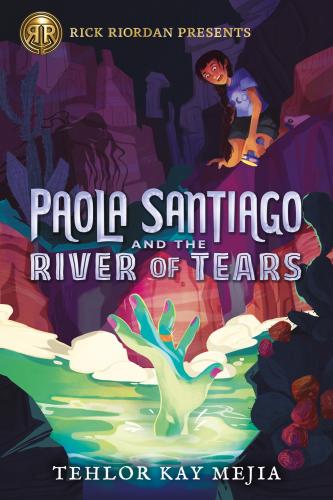 Space-obsessed 12-year-old Paola Santiago and her two best friends, Emma and Dante, know the rule: Stay away from the river. It’s all they’ve heard since a schoolmate of theirs drowned a year ago. Pao is embarrassed to admit that she has been told to stay away for even longer than that, because her mother is constantly warning her about La Llorona, the wailing ghost woman who wanders the banks of the Gila at night, looking for young people to drag into its murky depths.

Hating her mother’s humiliating superstitions and knowing that she and her friends would never venture into the water, Pao organizes a meet-up to test out her new telescope near the Gila, since it’s the best stargazing spot. But when Emma never arrives and Pao sees a shadowy figure in the reeds, it seems like maybe her mom was right. . . .

Pao has always relied on hard science to make sense of the world, but to find her friend she will have to enter the world of her nightmares, which includes unnatural mist, mind-bending monsters, and relentless spirits controlled by a terrifying force that defies both logic and legend.

Endorsed by Rick Riordan, author of Percy Jackson and the Olympians, soon to be a series on Disney+.
Tehlor Kay Mejia is an Oregon native in love with the alpine meadows and evergreen forests of her home state, where she lives with her daughter. When she's not writing, you can find her plucking at her guitar, stealing rosemary sprigs from overgrown gardens, or trying to make the perfect vegan tamale. She is the author of two middle grade novels about Paola Santiago as well as the YA fantasy novels We Set the Dark on Fire and We Unleash the Merciless Storm. Her Twitter handle is @tehlorkay.
*"A new hero's fantastic and fantastical debut--her next appearance can't come soon enough."—Kirkus Reviews (starred review)

*"Mejia draws upon her Latinx heritage to conjure creatures from folklore . . . and layer[s] in realistic plot points: socioeconomic and immigration concerns, the tension between science and superstition."—Publishers Weekly (starred review)

*"This fast-paced journey into Latinx folklore, with its clever protagonist, is sure to keep readers turning pages into the night."—Booklist (starred review)