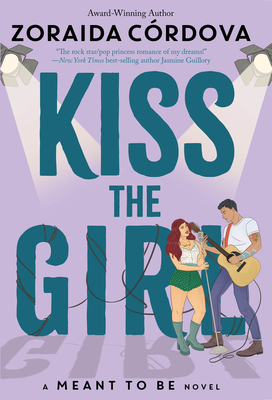 
Not Yet Published—Pre-Order Now
(This book cannot be returned.)
A modern tale of unexpectedly falling in love and finding your voice, Kiss the Girl is the highly anticipated third installment in the acclaimed and best-selling Meant to Be collection.

Ariel del Mar is one of the most famous singers in the world. She and her sisters—together, known as the band Siren Seven—have been a pop culture phenomenon since they were kids. On stage, wearing her iconic red wig and sequined costumes, staring out at a sea of fans, is where she shines. Anyone would think she’s the girl who has everything.

But lately, she wants more. Siren Seven is wrapping up their farewell tour, and Ariel can’t wait to spend the summer just living a normal life—part of a world she’s only ever seen from the outside. But her father, the head of Atlantica Records, has other plans: begin her breakout solo career immediately, starting with a splashy announcement on a morning talk show.

The night before, Ariel and her sisters sneak out of their Manhattan penthouse for a night of incognito fun at a rock concert in Brooklyn. It’s there that Ariel crosses paths with Eric Reyes, dreamy lead singer of an up-and-coming band. Unaware of her true identity, Eric spontaneously invites her on the road for the summer. And for the first time in her life, Ariel disobeys her father—and goes with him.

Caught between the world she longs for and the one she’s left behind, can Ariel follow her dreams, fall in love, and, somehow, find her own voice?
Zoraida Córdova is the acclaimed author of more than two dozen novels and short stories, including the Brooklyn Brujas series, Star Wars: The High Republic: Convergence, and The Inheritance of Orquídea Divina. In addition to writing novels, she serves on the board of We Need Diverse Books, and is the co-editor of the bestselling anthology Vampires Never Get Old, as well as the cohost of the writing podcast, Deadline City. She writes romance novels as Zoey Castile. Zoraida was born in Guayaquil, Ecuador, and calls New York City home. When she’s not working, she’s roaming the world in search of magical stories. For more information, visit her at ZoraidaCordova.com.