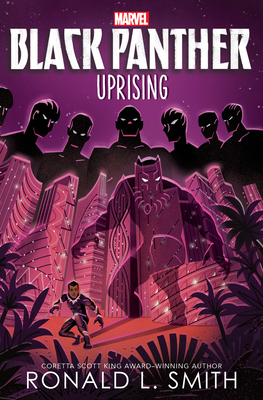 
On Our Shelves Now at:
For all fans of Black Panther, this is the newest adventure of young T’Challa, prince of Wakanda, in the hit Young Prince series from Ronald L. Smith, recipient of the 2016 Coretta Scott King/John Steptoe New Talent Author Award.

One day, he will wear the mantle of the Black Panther. But for now, thirteen-year-old T’Challa is back in Wakanda—back to his training, his family, and the comforts of home. And he is surprised to find himself missing his friends so soon after his recent time in America.

That’s why he’s thrilled when Sheila and Zeke come for a surprise visit. But their introduction to the wonders of Wakanda takes a dark turn when a national holiday goes wrong—and the mysterious, terrifying Originators are unleashed from the kingdom’s past. Even worse, now the elders of Wakanda, including T’Challa’s parents, are banished to a place beyond space and time.

To save his nation, T’Challa will need the help of all his friends, including M’Baku and his sister, Shuri. It’s a supernatural showdown between Wakanda’s past and its future, and it will challenge all that T’Challa thinks he knows about his home.

From award-winning author Ronald L. Smith, the third book in the Young Prince trilogy brings the series to an epic conclusion.
Ronald L. Smith is an award-winning writer of children's literature including the middle grade novels Black Panther: The Young Prince, The Mesmerist, The Owls Have Come To Take Us Away, and Gloomstown, a Junior Library Guild Selection. His first novel, Hoodoo, earned him the 2016 Coretta Scott King/John Steptoe New Talent Author Award and the ILA Award for Intermediate Fiction from The International Literacy Association. Before he became a full-time writer, he worked in advertising and wrote TV commercials for big corporations. He is much happier writing books for young people.
“Series fans and new readers alike are sure to enjoy this installment. An exciting adventure weaving present-day threats with knowledge of the past.”—Kirkus Reviews