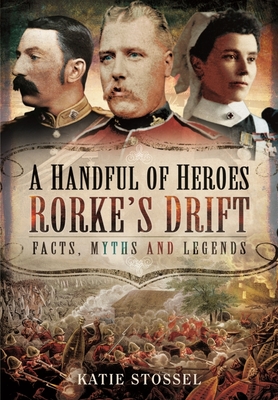 
Not On Our Shelves—Ships in 1-5 Days
Thanks to newly discovered letters and documents, A Handful of Heroes updates the history of the defense of Rorkes Drift, which will forever be one of the most celebrated British feats of arms.

Remarkably after such prolonged historical scrutiny, the authors research proves that there is yet more to discover about this famous incident of the Zulu War 1879 and her superbly researched book reveals a number of myths that have distorted what happened during the gallant defense of the small Mission Station. For example, it transpires that the isolated outpost was already well prepared for an attack by experts in field defense. While this in no way denigrates the heroic efforts of the heavily out-numbered defenders, it does help to explain the successful defense against seemingly overwhelming odds.

This fascinating and highly readable account goes on to examine in detail the famous Chard Report which has long been relied on by historians and authors. Doubts emerge as to its accuracy and evidence is provided which suggests the Reports author was coerced by a senior officer in order to protect the latters reputation. Likewise the letters of August Hammar, a young Swedish visitor to the Mission, put Reverend Otto Witts false account into perspective.

These and other revelations make A Handful of Heroes a fresh and important addition to the bibliography of this legendary Zulu War engagement.