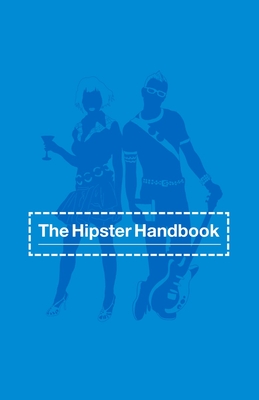 
Special Order—Subject to Availability
A hilarious book that will teach you everything you need to know to be too cool for school: "Your official guide to the language, culture and style of hipsters young and old." —Los Angeles Times

hip•ster - \hip-stur (s)\ n. One who possesses tastes, social attitudes, and opinions deemed cool by the cool. (Note: it is no longer recommended that one use the term "cool"; a Hipster would instead say "deck.") The Hipster walks among the masses in daily life but is not a part of them and shuns or reduces to kitsch anything held dear by the mainstream. A Hipster ideally possesses no more than 2% body fat.

Clues You Are a Hipster

1. You graduated from a liberal arts school whose football team hasn't won a game since the Reagan administration.

2. You frequently use the term "postmodern" (or its commonly used variation"PoMo") as an adjective, noun, and verb.

3. You carry a shoulder-strap messenger bag and have at one time or another worn a pair of horn-rimmed or Elvis Costello-style glasses.

4. You have refined taste and consider yourself exceptionally cultured, but have one pop vice (ElimiDATE, Quiet Riot, and Entertainment Weekly are popular ones) that helps to define you as well-rounded.

5. You have kissed someone of the same gender and often bring this up in casual conversation.

6. You spend much of your leisure time in bars and restaurants with monosyllabic names like Plant, Bound, and Shine.

7. You bought your dishes and a checkered tablecloth at a thrift shop to be kitschy, and often throw vegetarian dinner parties.

9. You enjoy complaining about gentrification even though you are responsible for it yourself.

10. Your hair looks best unwashed and you position your head on your pillow at night in a way that will really maximize your cowlicks.

11. You own records put out by Matador, DFA, Definitive Jux, Dischord, Warp, Thrill Jockey, Smells Like Records, and Drag City.
ROBERT LANHAM is the author of the romantic series known as The Emerald Beach Trilogy which includes the works Pre-Coitus, Coitus, and Aftermath. This collection of novels was recently called “a beach towel classic” by Redbook. Robert has a great body and often drives shirtless in his Camaro. He brushes his teeth several times daily, but is nevertheless prone to cavities. He is currently the Editor of FREEwilliamsburg, which can be found online at www.freewilliamsburg.com. He lives in Brooklyn, New York and works at Foot Locker on the weekends.

BRET NICELY's theories linking artistic practices with sandwich making buttressed much of the cultural output of the early 21st century. His work "Post-Structuralist Beer n' Brat" won the 2002 Turner Prize and was named a "Best One Dish Meal" by Gourmet Magazine. Bret began working with Robert Lanham through their shared interest in falafel, and in 1999 became the Chief Creative Officer at FREEwilliamsburg. He lectures widely around the world and currently lives in Brooklyn.

JEFF "J-DAWG" BECHTEL grew up on the cruel streets of Richmond, Indiana. As a teenager, he battled an addiction to glue and took up drawing to escape the thug life. He was recently called "the greatest Drawer of his generation" by Phil Donahue. His work has appeared in Dutch, Maxim International, and Family Circus. He currently lives and works in Brooklyn.
"The Hipster Handbook ... proves that behind every goatee, shaggy hairdo and baggy blouse, there's still a lot of preening."
—The New York Times

"The Hipster Handbook is your official guide to the language, culture and style of hipsters young and old…. There's even a dating guide for various hipster combinations." —Los Angeles Times

"Describes everything cool—the slang, the dress code, the career path, greetings and (of course) taste in music kids from the Inner Mission to Williamsburg ascribe to—in pitch-perfect detail…. [T]his guy clearly has some insider information himself. Gently teasing and hilarious." —Philadelphia Weekly

"The Hipster Handbook is The Official Preppy Handbook for people who wear Atari T-shirts." —Esquire