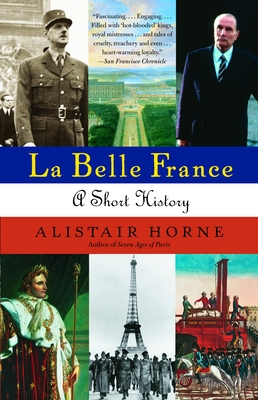 "A useful and charming introduction to a nation that has oh-so-definitely helped make the modern world what it is... Horne does a service in helping the reading navigate the complexities of French history." —Los Angeles Times

From the aclaimed British historian and author of Seven Ages of Paris comes a sweeping, grand narrative written with all the verve, erudition, and vividness that are his hallmarks. It recounts the hugely absorbing story of the country that has contributed to the world so much talent, style, and political innovation.

Beginning with Julius Caesar’s division of Gaul into three parts, Horne leads us through the ages from Charlemagne to Chirac, touring battlefields from the Hundred Years’ War to Indochina and Algeria, and giving us luminous portraits of the nation’s leaders, philosophers, writers, artists, and composers. This is a captivating, beautifully illustrated, and comprehensive yet concise history of France.

Alistair Horne is the author of eighteen previous books, including A Savage War of Peace: Algeria 1954—1962, The Price of Glory: Verdun 1916, How Far from Austerlitz?: Napoleon 1805—1815 and the official biography of British prime minister Harold Macmillan. He is a fellow at St. Anthony’s College, Oxford, and lives in Oxfordshire. He was awarded the French Légion d’Honneur in 1993 and received a knighthood in 2003 for his work on French history.
"Fascinating. . . . Engaging. . . . Filled with 'hot-blooded' kings, royal mistressesÉand tales of cruelty, treachery and even, occasionally, heart-warming loyalty." –San Francisco Chronicle

"[Horne] is a virtuoso of the character sketch and the illuminating vignette. . . . La Belle France, with its refreshingly subjective style, possesses more treasures than a whole wall full of textbooks." –The Wall Street Journal

"A breathtaking tour of French history, from its earliest kings through the Mitterrand government. . . . There are few countries with a more fascinating history than France." –The Seattle Times

"A useful and charming introduction to a nation that has oh-so-definitely helped make the modern world what it is. . . . Horne does a service in helping the reader navigate the complexities of French history." –Los Angeles Times