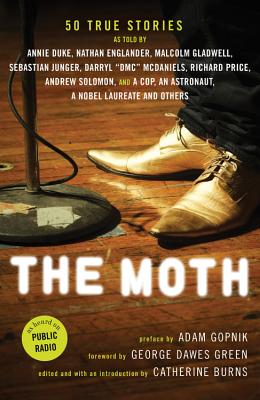 
Not On Our Shelves—Ships in 1-5 Days
The first collection from celebrated storytelling phenomenon The Moth presents fifty spellbinding, soul-bearing stories selected from their extensive archive.

With tales from writer Malcolm Gladwell's wedding toast gone horribly awry; legendary rapper Darryl "DMC" McDaniels' obsession with a Sarah McLachlan song; poker champion Annie Duke's two million-dollar hand; and A. E. Hotchner's death-defying stint in a bullring . . . with his friend Ernest Hemingway. Read about the panic of former Clinton Press Secretary Joe Lockhart when he misses Air Force One after a hard night of drinking in Moscow, and Dr. George Lombardi's fight to save Mother Teresa's life. Inspired by friends telling stories on a porch, The Moth was born in small-town Georgia, garnered a cult following in New York City, and then rose to national acclaim with the wildly popular podcast and Peabody Award-winning weekly public radio show The Moth Radio Hour.

A beloved read for Moth enthusiasts and all who savor well-told, hilarious, and heartbreaking stories.
Adam Gopnik is a staff writer at The New Yorker; he has written for the magazine since 1986. Gopnik has three National Magazine awards, for essays and for criticism, and also a George Polk Award for Magazine Reporting. In March of 2013, Gopnik was awarded the medal of Chevalier of the Order of Arts and Letters. The author of numerous bestselling books, including Paris to the Moon, he lives in New York City.

Catherine Burns is The Moth's long-time Artistic Director and a host and producer of the Peabody Award-winning The Moth Radio Hour. She is coauthor of the New York Times bestseller How to Tell a Story: The Essential Guide to Memorable Storytelling from The Moth, and the editor of the bestselling and critically acclaimed All These Wonders and Occasional Magic. Prior to The Moth, she directed the feature film A Pound of Flesh, and produced television and independent films. She attended her first Moth back in 2000, fell in love with the show, and was, in turn, a GrandSLAM contestant and volunteer in the Moth Community Program before joining the staff full time. Born and raised in Alabama, she now lives in Brooklyn with her husband and son.

George Dawes Green, founder of The Moth and Unchained, is an internationally celebrated author. His first novel, The Caveman’s Valentine, won the Edgar Award and became a motion picture starring Samuel L. Jackson. The Juror was an international bestseller in more than twenty languages and was the basis for the movie starring Demi Moore and Alec Baldwin. Ravens was chosen as one of the best books of 2009 by the Los Angeles Times, the Wall Street Journal, and the Daily Mail. George grew up in Georgia and now lives in Brooklyn, New York.

The Moth is an acclaimed nonprofit organization dedicated to the art and craft of storytelling. Since its launch in 1997, The Moth has presented more than 50,000 stories, told live and without notes to standing­-room-only crowds worldwide. The Peabody Award-winning The Moth Radio Hour airs on more than 575 stations nationwide, and The Moth podcast is downloaded more than ninety million times annually.
"Passionate . . . brilliant, and quietly addictive."—The London Guardian

"[In this book] the stories not only maintain their oral integrity but also take on new dimensions, allowing you to ponder a turn of events or to swirl the language around in your head without missing the next part of the story."—David Vecsey, NYTimes.com "The 6th Floor" blog

"Burns, artistic director of the award-winning The Moth Radio Hour, frees stories whetted for a live audience onto the page, proving the richness of great storytelling: that one can gain as much as a member of an audience communally cringing, laughing and weeping, as a reader privately surrendering to the complicity of human experience."—Publishers Weekly

"When I started to read the new collection 'The Moth: 50 True Stories,' [the storytellers'] distinctive voices turned on my audio button. It felt as if they had channeled these stories to me."—Elizabeth Taylor, Chicago Tribune "Editor's Choice"