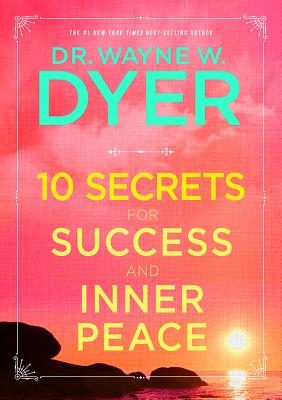 
Special Order—Subject to Availability
Best-selling author and lecturer Wayne W. Dyer has written a thought-provoking book for those of us who have chosen to consciously be on our life path. The ten "secrets" for success and inner peace presented here apply whether you’re just embarking on your path, are nearing the end of it, or are on the path in any way. Dr. Dyer urges you to read these ten secrets with an open heart. By doing so, you’ll learn to feel the peace of God that truly defines success.
Affectionately called the "father of motivation" by his fans, Dr. Wayne W. Dyer was an internationally renowned author, speaker, and pioneer in the field of self-development. Over the four decades of his career, he wrote more than 40 books (21 of which became New York Times bestsellers), created numerous audio programs and videos, and appeared on thousands of television and radio shows. His books Manifest Your Destiny, Wisdom of the Ages, There’s a Spiritual Solution to Every Problem, and the New York Times bestsellers 10 Secrets for Success and Inner Peace, The Power of Intention, Inspiration, Change Your Thoughts—Change Your Life, Excuses Begone!, Wishes Fulfilled, and I Can See Clearly Now were all featured as National Public Television specials. Wayne held a doctorate in educational counseling from Wayne State University, was an associate professor at St. John’s University in New York, and honored a lifetime commitment to education and finding the Higher Self. In 2015, he left his body, returning to Infinite Source to embark on his next adventure. Website: www.DrWayneDyer.com