The Shift: Taking Your Life from Ambition to Meaning (Paperback) 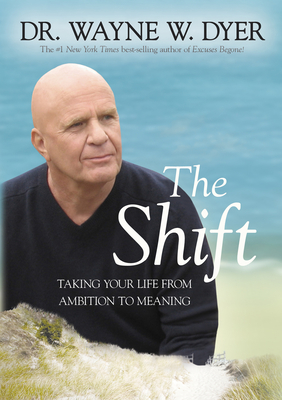 The Shift: Taking Your Life from Ambition to Meaning (Paperback)


Not On Our Shelves—Ships in 1-5 Days
The Shift—a companion book to the movie of the same name—illustrates how and why to make the move from ambition to meaning. Such a shift eliminates our feelings of separateness, illuminates our spiritual connectedness, and involves moving from the ego-directed morning into the afternoon of life where everything is primarily influenced by purpose.

As we contemplate leaving the morning of our life, where ego has played a commanding role, and entering the afternoon (and evening), where meaning and purpose replace ambition and struggle, we may encounter unexpected occurrences that accompany this new direction. It’s almost a universal law that we’ll experience a fall of some kind. Yet these falls or low points provide the energy we need to move away from ego and into a life of meaning and purpose.

The Shift doesn’t mean that we lose our drive and ambition; it signifies that we become ambitious about something new. We make a commitment to living a life based on experiencing meaning and feeling purposeful, rather than never-ending demands and false promises that are the trademark of the ego’s agenda.

As Dr. Wayne W. Dyer so eloquently reveals in these pages, we all have the choice to shift our lives from ambition to meaning . . . and thereby complete our return to the Source that created us.
Affectionately called the "father of motivation" by his fans, Dr. Wayne W. Dyer was an internationally renowned author, speaker, and pioneer in the field of self-development. Over the four decades of his career, he wrote more than 40 books (21 of which became New York Times bestsellers), created numerous audio programs and videos, and appeared on thousands of television and radio shows. His books Manifest Your Destiny, Wisdom of the Ages, There’s a Spiritual Solution to Every Problem, and the New York Times bestsellers 10 Secrets for Success and Inner Peace, The Power of Intention, Inspiration, Change Your Thoughts—Change Your Life, Excuses Begone!, Wishes Fulfilled, and I Can See Clearly Now were all featured as National Public Television specials.Wayne held a doctorate in educational counseling from Wayne State University, had been an associate professor at St. John’s University in New York, and honored a lifetime commitment to learning and finding the Higher Self. In 2015, he left his body, returning to Infinite Source to embark on his next adventure.Website: www.DrWayneDyer.com