America on the Brink: How the Political Struggle Over the War of 1812 Almost Destroyed the Young Republic (Paperback) 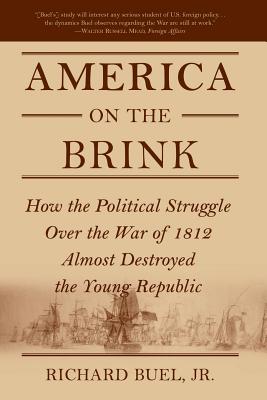 America on the Brink: How the Political Struggle Over the War of 1812 Almost Destroyed the Young Republic (Paperback)

The fascinating story of how New England Federalists threatened to dissolve the Union by making a separate peace with England during the War of 1812.

Many people would be surprised to learn that the struggle between Thomas Jefferson's Republican Party and Alexander Hamilton's Federalist Party defined--and jeopardized--the political life of the early American republic. Richard Buel Jr.'s America on the Brink looks at why the Federalists, who worked so hard to consolidate the federal government before 1800, went to great lengths to subvert it after Jefferson's election. In addition to taking the side of the British in the diplomatic dance before the war, the Federalists did everything they could to impede the prosecution of the war, even threatening the Madison Administration with a separate peace for New England in 1814.

Readers fascinated by the world of the Founding Fathers will come away from this riveting account with a new appreciation for how close the new nation came to falling apart almost fifty years before the Civil War.

Richard Buel is Professor of History Emeritus at Wesleyan University. He is author of several books, including In Irons: Britain's Naval Supremacy and the American Revolutionary Economy. He lives in Essex, Connecticut

“Buel's analysis, rich in detail, adds a provocative edge to our understanding of this war.” —American Historical Review

“The founding generation feared partisan conflict, and Richard Buel shows why. No previous writer has so persuasively illuminated the inextricable connections between divisions over foreign policy and partisan political alignments during a period of revolutionary instability and change throughout the Atlantic world. After Jefferson's election, Federalists who had struggled so hard to secure the success of the American experiment during the 1790s jeopardized the union's survival as they sought to regain power on the national level and preserve their tenuous control in New England. America on the Brink is an important contribution to our understanding of the founding of the American federal republic. Buel's fine book represents political history at its very best.” —Peter Onuf, University of Virginia

“Buel's keen analysis of the partisan battle between Federalists and Jeffersonians argues powerfully that prominent Massachusetts leaders aimed to subvert the United States government during the War of 1812. This fresh, clearheaded, and masterful narrative reveals the intricate political maneuvers of politicians and statesmen during a perilous era.” —Richard D. Brown, University of Connecticut

“In this carefully researched and vigorously argued account of America's least understood war, Richard Buel offers a searching critique of the political motives that placed Federalist leaders in Massachusetts and Connecticut at loggerheads with the national government. Artfully surveying the realms of politics and diplomacy from an avowedly Republican perspective, Buel closely examines the political rhetoric, partisan calculations, and internal divisions of both parties, and explains how these in turn affected and impaired the conduct of the war. In doing so, he makes a potent case for taking seriously the depth of Federalist animosity toward Republican policies and the extent to which opposition to the war went beyond non-compliance with national measures to countenance the collapse of the new American nation-state. Not every student of the war may accept his conclusions, but his argument supports a critical reappraisal of a seemingly disloyal opposition.” —Jack Rakove, Stanford University