Subjectivity and Truth: Lectures at the Collège de France, 1980-1981 (Hardcover) 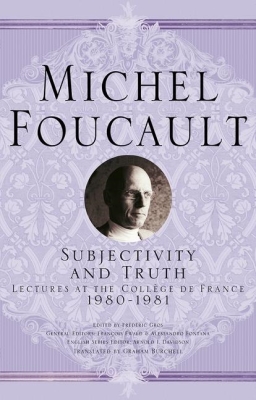 Subjectivity and Truth: Lectures at the Collège de France, 1980-1981 (Hardcover)

"The working hypothesis is this: it is true that sexuality as experience is obviously not independent of codes and systems of prohibitions, but it needs to be recalled straightaway that these codes are astonishingly stable, continuous, and slow to change. It needs to be recalled also that the way in which they are observed or transgressed also seems to be very stable and very repetitive. On the other hand, the point of historical mobility, what no doubt change most often, what are most fragile, are modalities of experience."

In 1981 Foucault delivered a course of lectures which marked a decisive reorientation in his thought and of the project of a History of Sexuality outlined in 1976. It was in these lectures that arts of living became the focal point around which he developed a new way of thinking about subjectivity. It was also the moment when Foucault problematized a conception of ethics understood as the patient elaboration of a relationship of self to self. It was the study of the sexual experience of the Ancients that made these new conceptual developments possible. Within this framework, Foucault examined medical writings, tracts on marriage, the philosophy of love, or the prognostic value of erotic dreams, for evidence of a structuration of the subject in his relationship to pleasures (aphrodisia) which is prior to the modern construction of a science of sexuality as well as to the Christian fearful obsession with the flesh. What was actually at stake was establishing that the imposition of a scrupulous and interminable hermeneutics of desire was the invention of Christianity. But to do this it was necessary to establish the irreducible specificity of ancient techniques of self.

In these lectures, which clearly foreshadow The Use of Pleasures and The Care of Self, Foucault examines the Greek subordination of gender differences to the primacy of an opposition between active and passive, as well as the development by Imperial stoicism of a model of the conjugal bond which advocates unwavering fidelity and shared feelings and which leads to the disqualification of homosexuality.
Michel Foucault, acknowledged as the pre-eminent philosopher of France in the 1970s and 1980s, continues to have enormous impact throughout the world in many disciplines.