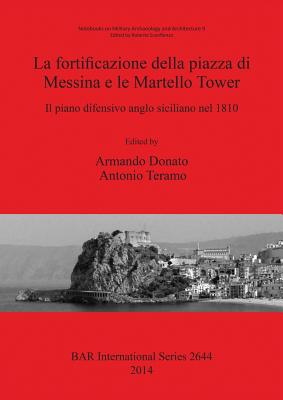 Notebooks on Military Archaeology and Architecture 9

The presence of the British Army in Sicily during the years of the Napoleonic Wars has deeply marked the history of the island. There are many fortifications still visible, testifying to the British effort to defend Sicily against any possible military aggression. The present work is the result of various studies and research, with the specific objective of documenting and cataloguing the large fortified heritage of the city of Messina, currently undervalued and usable. In particular, the focus is on 1810, an important year for the central project of building fortifications around the Piazza of Messina, as well as the vain attempt to make an amphibious landing on the coast of Sicily, organised by Joachim Murat. The Martello Towers still exist, perhaps the most visible evidence of the work done in that time from the body of the Royal Engineers. A series of surveys on the territory, in conjunction with documentary evidence, have identified other military structures from that period, as well as tracing the precise location of those fortifications that no longer exist. This research therefore sets the stage for a more in-depth study about the interventions of the British for the fortification of the square of Messina.