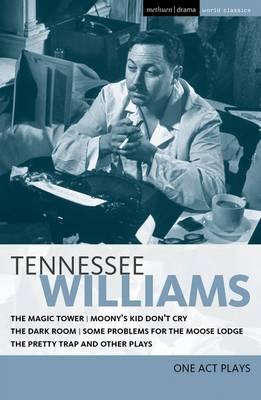 The peak of my virtuosity was in the one- act plays. Some of which are like firecrackers on a rope. Tennessee Williams

Tennessee Williams' lesser-known one act plays reveal a tantalising and fascinating perspective to one of the world's most important playwrights. Written between 1934 and 1980, the plays of the very young writer, then of the successful Tennessee Williams, and finally of the troubled man of the 1970s, this volume offers a panoramic yet detailed view of the themes, demons, and wit of this iconic playwright. The volume depicts American life during the Great Depression and after, populated by a hopelessly hopeful chorus girl, a munitions manufacturer ensnared in a love triangle, a rural family that deals justice on its children, an overconfident mob dandy, a poor couple who quarrel to vanquish despair, a young spinster enthralled by the impulse of rebellion, and, in The Magic Tower, a passionate artist and his wife whose youth and optimism are not enough to protect their 'dream marriage.' This collection gathers some of Williams's most exuberant early work and includes one-acts that he would later expand to powerful full-length dramas: 'The Pretty Trap, ' a cheerful take on The Glass Menagerie, and 'Interior: Panic, ' a precursor to A Streetcar Named Desire.
Plays included are: At Liberty, The Magic Tower, Me, Vashya, Curtains for the Gentleman, In Our Profession, Every Twenty Minutes, Honor the Living, The Cast of the Crushed Petunias, Moony's Kid Don't Cry, The Dark Room, The Pretty Trap, Interior: Panic, Kingdom of Earth, I Never Get Dressed Till After Dark on Sundays and Some Problems for The Moose Lodge. The volume also features a foreword by Terence McNally.
Tennessee Williams (1911-1983) is widely regarded as one of the 20th century's most important writers, and was also one of its most successful and prolific. His classic works include Cat on a Hot Tin Roof, A Streetcar Named Desire, The Glass Menagerie, Summer and Smoke, Camino Real, Sweet Bird of Youth, Night of the Iguana, Orpheus Descending, and The Rose Tattoo.