Mainstreaming Gender, Democratizing the State: Institutional Mechanisms for the Advancement of Women (Perspectives on Democratization) (Paperback) 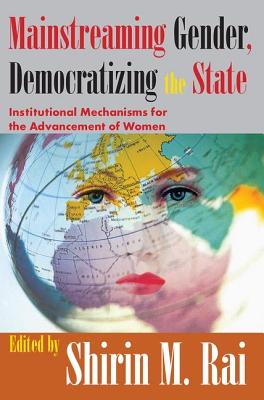 Mainstreaming Gender, Democratizing the State: Institutional Mechanisms for the Advancement of Women (Perspectives on Democratization) (Paperback)


Not On Our Shelves—Ships in 1-5 Days
(This book cannot be returned.)
Mainstreaming Gender, Democratizing the State reflects the commitment of the United Nations to promote mechanisms that aim to achieve equality between women and men. It identifies institutional mechanisms for the advancement of women including national machineries as one of twelve critical areas of concern. National machineries are the primary institutional mechanism entrusted with the implementation of the strategic objectives contained in the goals for equity set by the United Nations. The mandate of these national institutions has evolved from promoting women-specific projects to ensuring that equality concerns are integrated into all government legislation, policy, programs, and budgetary processes. National machineries face serious constraints in fulfilling their mandate including; inadequate financial and human resources, relatively powerless locations within government structures, and insufficient linkage with civil societies. This volume illustrates that the ability of UN-member states to subscribe to the agenda of equality between women and men has been significantly enhanced by the creation of these national-level institutions. National machineries for the advancement of women were initially conceived at the World Conference on the International Women's Year held in Mexico City in 1975 and since then have been considered systematically by world conferences on women in Copenhagen (1980), Nairobi (1985), and Beijing (1995), as well as the sessions of the Commission on the Status of Women. The twenty-third special session of the General Assembly in Beijing reiterated the significant role that national machineries play in promoting equality between women and men, gender mainstreaming, and monitoring of the implementation of the Beijing Platform for Action as well as the Convention on the Elimination of All Forms of Discrimination against Women. There has been a long-standing need for a volume to bring together discussions on theory and practice as well as comparative analysis and in-depth case studies of national machineries; this book responds to that need.