The Darkest Summer: Pusan and Inchon 1950: The Battles That Saved South Korea--and the Marines--from Extinction (Paperback) 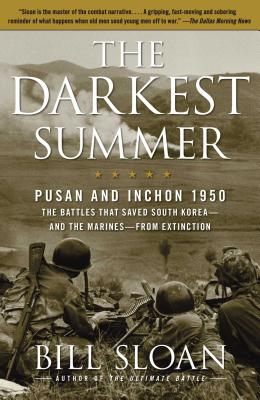 The Darkest Summer: Pusan and Inchon 1950: The Battles That Saved South Korea--and the Marines--from Extinction (Paperback)


Not On Our Shelves—Ships in 1-5 Days
The acclaimed, dramatic story of the first three months of the Korean War, when outnumbered and outgunned Marines and GIs executed two of the greatest military operations in history and saved South Korea—and the Marine Corps—from extinction.

The Darkest Summer is the dramatic story of the first three months of the Korean War as it has never been told before. A narrative studded with gripping eyewitness accounts, it focuses on the fateful days when the Korean War’s most decisive battles were fought and the Americans who fought them went—however briefly—from the depths of despair to the exultation of total conquest. Drawing on exclusive interviews with dozens of surviving U.S. veterans, it reveals how one ninety-day period changed the course of modern history and opens a unique and revealing window on an all-but-forgotten war.
Bill Sloan is a respected military historian and author of more than a dozen books, including Brotherhood of Heroes: The Ultimate Battle. He lives in Dallas, Texas.

"In 1950, President Truman and others were in the process of a military reunifying and downsizing that would have essentially eliminated the U.S. Marine Corps. Then came Korea, and in the battles for Pusan and Inchon, the Marines did what had to be done. Bill Sloan, the premier chronicler of war at the ground level, tells the whole awful, bloody story in his superb The Darkest Summer, a dead-on account that answers forever the question, 'What is war really like?'" -- Jim Lehrer, anchor of The NewsHour on PBS and author of Oh, Johnny

"The Darkest Summer is a truly heroic book. In heart-pounding detail, Bill Sloan recounts the most momentous season in the history of the U.S. Marine Corps -- the fateful summer of 1950. Riveting from the first page to the last." -- Alex Kershaw, author of Escape from the Deep and The Bedford Boys

"There is no story quite like this in military history -- the epic tale of how the American Army, the mightiest war machine in the history of the world in 1945, was surprised and overrun a mere five years later by a nation that had been a subject-state of Japan in 1945. And then how America's pathetically ill-prepared armed forces regrouped with astonishing speed and launched one of the most audacious counteroffensives in military annals, one that saved South Korea from communism and changed the course of world history. The Darkest Summer is a stunningly good military history, crafted in the style of an accomplished novel, with characters that are almost too interesting to be believed." -- Donald L. Miller, author of Masters of the Air

"The Darkest Summer is a harrowing and heroic tale of Korean War valor. By interviewing U.S. Marines who fought at Pusan and Inchon, Bill Sloan transports the reader to ground zero in Korea. A truly riveting read." -- Douglas Brinkley, author of The Wilderness Warrior

"The Darkest Summer is not only exciting reading -- a cautionary tale about Korea in 1950 -- but it should also make every sensible reader ask why it's a good idea to fight in faraway foreign countries like Korea, or Afghanistan today, without a plan for victory or an exit strategy." -- Michael Korda, author of Ike

"How did we get enmeshed in this struggle halfway around the world? Was it worth it? Was it victory, defeat, or merely stalemate? In Bill Sloan's well-told tale, I found my answers." -- Joseph E. Persico, author of Roosevelt's Secret War