King of the Wind: The Story of the Godolphin Arabian (Paperback) 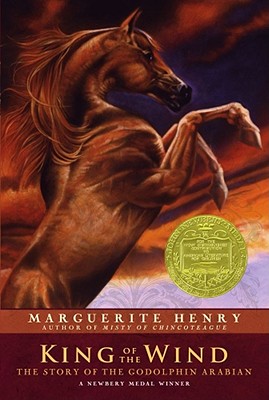 King of the Wind: The Story of the Godolphin Arabian (Paperback)


Not On Our Shelves—Ships in 1-5 Days
He was named "Sham" for the sun, this golden-red stallion born in the Sultan of Morocco's stone stables. Upon his heel was a small white spot, the symbol of speed. But on his chest was the symbol of misfortune. Although he was swift as the desert winds, Sham's pedigree would be scorned all his life by cruel masters and owners.

This is the classic story of Sham and his friend, the stable boy Agba. their adventures take them from the sands of the Sahara. to the royal courts of France, and finally to the green pastures and stately homes of England. For Sham was the renowned Godolphin Arabian, whose blood flows through the veins of almost very superior thoroughbred. Sham's speed -- like his story -- has become legendary.
Marguerite Henry was the beloved author of such classic horse stories as King of the Wind; Misty of Chincoteague; and Stormy, Misty’s Foal, all of which are available in Aladdin paperback editions.

Wesley Dennis was best known for his illustrations in collaboration with author Marguerite Henry. They published sixteen books together.
"A book to delight all horse lovers."
-- Horn Book