The Rock and the River (Paperback) 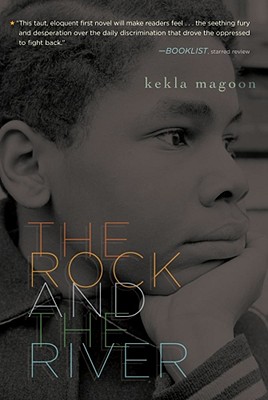 The Rock and the River (Paperback)

In this “taut, eloquent first novel” (Booklist, starred review), a young Black boy wrestles with conflicting notions of revolution and family loyalty as he becomes involved with the Black Panthers in 1968 Chicago.

For thirteen-year-old Sam, it’s not easy being the son of known civil rights activist Roland Childs. Especially when his older (and best friend), Stick, begins to drift away from him for no apparent reason. And then it happens: Sam finds something that changes everything forever.

Sam has always had faith in his father, but when he finds literature about the Black Panthers under Stick’s bed, he’s not sure who to believe: his father or his best friend. Suddenly, nothing feels certain anymore.

Sam wants to believe that his father is right: You can effect change without using violence. But as time goes on, Sam grows weary of standing by and watching as his friends and family suffer at the hands of racism in their own community. Sam beings to explore the Panthers with Stick, but soon he’s involved in something far more serious—and more dangerous—than he could have ever predicted. Sam is faced with a difficult decision. Will he follow his father or his brother? His mind or his heart? The rock or the river?
Kekla Magoon has worked with youth-serving nonprofit organizations in New York City and Chicago. She holds an MFA in writing for children from the Vermont College of Fine Arts and her first novel, The Rock and the River, won the Coretta Scott King - John Steptoe Award for New Talent. She resides in New York City and you can visit her at KeklaMagoon.com.

"This is an essential story that has been waiting for its time and its teller. A brave and brilliant accomplishment." -- Helen Frost, Printz Honor Award-winning author of Spinning Through the Universe

"Vividly, poignantly, and without compromise, Kekla Magoon takes us to the heart of a world in the messy business of monumental change. The Rock and the River is an extraordinary book that brings unflinchingly to life an extraordinary moment in time." -- Tim Wynne-Jones, author of Rex Zero and the End of the World

"What a rich and passionate debut novel! With both intensity and humor, the story that unfolds is at once riveting, disquieting, and ultimately most satisfying." -- Ellen Levine, Caldecott Honor Award-winning author of Henry's Freedom Box

"This explosive coming-of-age story, taut with tension and protest, propelled me along like the river of its title. Magoon is most certainly a new and serious talent to watch. An intensely significant story of emotional and historical depth that resonates with relevancy for our age." -- Sundee T. Frazier, winner of the ALA 2008 Coretta Scott King/John Steptoe New Talent Award for Brendan Buckley's Universe and Everything in It