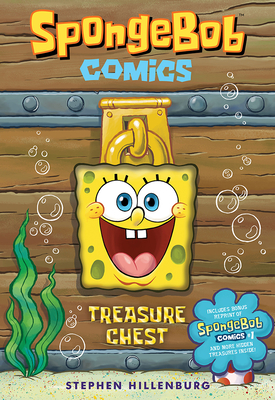 
Not On Our Shelves—Ships in 1-5 Days
SpongeBob Comics: Treasure Chest is a deluxe collection of the best previously published SpongeBob Comics stories, specially selected by creator Stephen Hillenburg, and geared toward the first generation of SpongeBob fans. This deluxe edition features a hardcover slipcase with die-cuts, art by some of the biggest comics creators in the industry (including Tony Millionaire and Al Jaffee), a bonus facsimile reprint of the first SpongeBob Comics issue, and an introduction by Stephen Hillenburg himself. The collection also includes new pinup artwork created specifically for this edition by Nathan Hale, Kaz, Gregg Schiegel Ross MacDonald, Dave Cooper, Renee French, Skottie Young, Sergio Aragones, Hillary Barta and Stephen DeStefano, and James Kochalka. Treasure Chest is one SpongeBob collection fans won’t want to miss!

Stephen Hillenburg is the creator and executive producer of the Emmy Award–winning SpongeBob SquarePants television series and movies. Prior to his career in animation, Hillenburg taught marine biology at the Ocean Institute in Dana Point, California. He has won two Emmy and six Annie Awards. He lives in California.

“The kids who started watching TV’s SpongeBob Squarepants in 1999 are now grownups, and this book is for them.”—Parade

“The comics in this colorful 200-page hardcover anthology have a modern sensibility, but the whole package feels like the sort of thick, colorful, jumbo kids’ books that have been a holiday staple for generations.”—ICv2