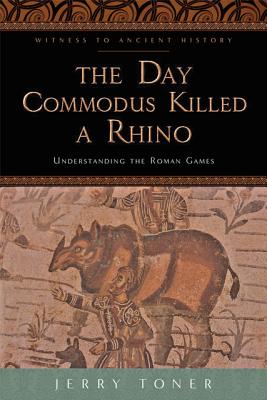 The Roman emperor Commodus wanted to kill a rhinoceros with a bow and arrow, and he wanted to do it in the Colosseum. Commodus's passion for hunting animals was so fervent that he dreamt of shooting a tiger, an elephant, and a hippopotamus; his prowess was such that people claimed he never missed when hurling his javelin or firing arrows from his bow. For fourteen days near the end of AD 192, the emperor mounted one of the most lavish and spectacular gladiatorial games Rome had ever seen. Commodus himself was the star attraction, and people rushed from all over Italy to witness the spectacle. But this slaughter was simply the warm-up act to the main event: the emperor was also planning to fight as a gladiator.

Why did Roman rulers spend vast resources on such over-the-top displays--and why did some emperors appear in them as combatants? Why did the Roman rabble enjoy watching the slaughter of animals and the sight of men fighting to the death? And how best can we in the modern world understand what was truly at stake in the circus and the arena? In The Day Commodus Killed a Rhino, Jerry Toner set out to answer these questions by vividly describing what it would have been like to attend Commodus' fantastic shows and watch one of his many appearances as both hunter and fighter.

Highlighting the massive logistical effort needed to supply the games with animals, performers, and criminals for execution, the book reveals how blood and gore were actually incidental to what really mattered. Gladiatorial games played a key role in establishing a forum for political debate between the rulers and the ruled. Roman crowds were not passive: they were made up of sophisticated consumers with their own political aims, which they used the games to secure. In addition, the games also served as a pure expression of what it meant to be a true Roman. Drawing on notions of personal honor, manly vigor, and sophisticated craftsmanship, the games were a story that the Romans loved to tell themselves about themselves.

Jerry Toner is a fellow and the director of studies in classics at Churchill College, University of Cambridge. He is the author of Leisure and Ancient Rome, Popular Culture in Ancient Rome, Roman Disasters, and Homer's Turk: How Classics Shaped Ideas of the East.