A Monument to Dynasty and Death: The Story of Rome's Colosseum and the Emperors Who Built It (Witness to Ancient History) (Hardcover) 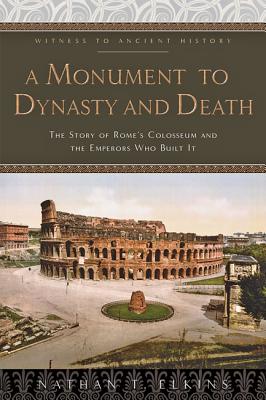 A Monument to Dynasty and Death: The Story of Rome's Colosseum and the Emperors Who Built It (Witness to Ancient History) (Hardcover)

Go behind the scenes to discover why the Colosseum was the king of amphitheaters in the Roman world--a paragon of Roman engineering prowess.

Early one morning in 80 CE, the Colosseum roared to life with the deafening cheers of tens of thousands of spectators as the emperor, Titus, inaugurated the new amphitheater with one hundred days of bloody spectacles. These games were much anticipated, for the new amphitheater had been under construction for a decade. Home to spectacles involving exotic beasts, elaborate executions of criminals, gladiatorial combats, and even--when flooded--small-scale naval battles, the building itself was also a marvel. Rising to a height of approximately 15 stories and occupying an area of 6 acres--more than four times the size of a modern football field--the Colosseum was the largest of all amphitheaters in the Roman Empire.

In A Monument to Dynasty and Death, Nathan T. Elkins tells the story of the Colosseum's construction under Vespasian, its dedication under Titus, and further enhancements added under Domitian. The Colosseum, Elkins argues, was far more than a lavish entertainment venue: it was an ideologically charged monument to the new dynasty, its aspirations, and its achievements.

A Monument to Dynasty and Death takes readers on a behind-the-scenes tour of the Colosseum from the subterranean tunnels, where elevators and cages transported gladiators and animals to the blood-soaked arena floor, to the imperial viewing box, to the amphitheater's decoration and amenities, such as fountains and an awning to shade spectators. Trained as an archaeologist, an art historian, and a historian of ancient Rome, Elkins deploys an interdisciplinary approach that draws on contemporary historical texts, inscriptions, archaeology, and visual evidence to convey the layered ideological messages communicated by the Colosseum. This engaging book is an excellent resource for classes on Roman art, architecture, history, civilization, and sport and spectacle.

Nathan T. Elkins is an associate professor of art history and the director of Undergraduate Research and Scholarly Achievement at Baylor University. He is the author of Monuments in Miniature: Architecture on Roman Coinage and The Image of Political Power in the Reign of Nerva, AD 96-98.