Our Germans: Project Paperclip and the National Security State (Paperback) 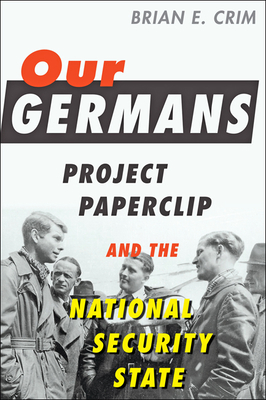 Our Germans: Project Paperclip and the National Security State (Paperback)

A gripping history of one of the United States' most controversial Cold War intelligence operations.

Project Paperclip brought hundreds of German scientists and engineers, including aerospace engineer Wernher von Braun, to the United States in the first decade after World War II. More than the freighters full of equipment or the documents recovered from caves and hastily abandoned warehouses, the German brains who designed and built the V-2 rocket and other wonder weapons for the Third Reich proved invaluable to America's emerging military-industrial complex. Whether they remained under military employment, transitioned to civilian agencies like NASA, or sought more lucrative careers with corporations flush with government contracts, German specialists recruited into the Paperclip program assumed enormously influential positions within the labyrinthine national security state.

Drawing on recently declassified documents from intelligence agencies, the Department of Defense, the FBI, and the State Department, Brian E. Crim's Our Germans examines the process of integrating German scientists into a national security state dominated by the armed services and defense industries. Crim explains how the Joint Intelligence Objectives Agency enticed targeted scientists, whitewashed the records of Nazis and war criminals, and deceived government agencies about the content of security investigations. Exploring the vicious bureaucratic rivalries that erupted over the wisdom, efficacy, and morality of pursuing Paperclip, Our Germans reveals how some Paperclip proponents and scientists influenced the perception of the rival Soviet threat by volunteering inflated estimates of Russian intentions and technical capabilities.

As it describes the project's embattled legacy, Our Germans reflects on the myriad ways that Paperclip has been remembered in culture and national memory. As this engaging book demonstrates, whether characterized as an expedient Cold War program born from military necessity or a dishonorable episode, the project ultimately reflects American ambivalence about the military-industrial complex and the viability of an ends justifies the means solution to external threats.