The Fabric of Empire: Material and Literary Cultures of the Global Atlantic, 1650-1850 (Studies in Early American Economy and Society from the Libra) (Hardcover) 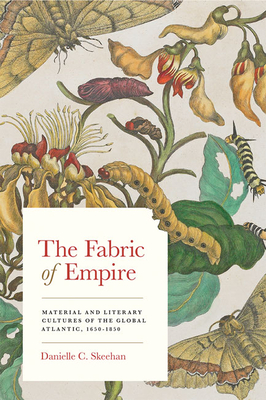 The Fabric of Empire: Material and Literary Cultures of the Global Atlantic, 1650-1850 (Studies in Early American Economy and Society from the Libra) (Hardcover)

Revealing the entangled lives of texts and textiles in the early modern Atlantic world.

Textiles are the books that the colony was not able to burn.--Asociaci n Femenina para el Desarrollo de Sacatep quez (AFEDES)

A history of the book in the Americas, across deep time, would reveal the origins of a literary tradition woven rather than written. It is in what Danielle Skeehan calls material texts that a people's history and culture is preserved, in their embroidery, their needlework, and their woven cloth. In defining textiles as a form of cultural writing, The Fabric of Empire challenges long-held ideas about authorship, textuality, and the making of books.

It is impossible to separate text from textiles in the early modern Atlantic: novels, newspapers, broadsides, and pamphlets were printed on paper made from household rags. Yet the untethering of text from textile served a colonial agenda to define authorship as reflected in ink and paper and the pen as an instrument wielded by learned men and women. Skeehan explains that the colonial definition of the book, and what constituted writing and authorship, left colonial regimes blind to nonalphabetic forms of media that preserved cultural knowledge, history, and lived experience. This book shifts how we look at cultural objects such as books and fabric and provides a material and literary history of resistance among the globally dispossessed.

Each chapter examines the manufacture and global circulation of a particular type of cloth alongside the complex print networks that ensured the circulation of these textiles, promoted their production, petitioned for or served to curtail the rights of textile workers, facilitated the exchange of textiles for human lives, and were, in turn, printed and written on surfaces manufactured from broken-down linen and cotton fibers. Bringing together methods and materials traditionally belonging to literary studies, book history, and material culture studies, The Fabric of Empire provides a new model for thinking about the different media, languages, literacies, and textualities in the early Atlantic world.

Danielle C. Skeehan is an assistant professor of English and comparative American studies at Oberlin College.