Inheriting the Bomb: The Collapse of the USSR and the Nuclear Disarmament of Ukraine (Johns Hopkins Nuclear History and Contemporary Affairs) (Paperback) 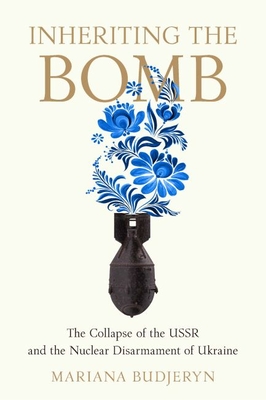 Inheriting the Bomb: The Collapse of the USSR and the Nuclear Disarmament of Ukraine (Johns Hopkins Nuclear History and Contemporary Affairs) (Paperback)

The collapse of the Soviet Union unleashed the specter of the largest wave of nuclear proliferation in history. Why did Ukraine ultimately choose the path of nuclear disarmament?

The collapse of the Soviet Union in 1991 left its nearly 30,000 nuclear weapons spread over the territories of four newly sovereign states: Belarus, Kazakhstan, the Russian Federation, and Ukraine. This collapse cast a shadow of profound ambiguity over the fate of the world's largest arsenal of the deadliest weapons ever created. In Inheriting the Bomb, Mariana Budjeryn reexamines the history of nuclear predicament caused by the Soviet collapse and the subsequent nuclear disarmament of the non-Russian Soviet successor states.

Although Belarus and Kazakhstan renounced their claim to Soviet nuclear weapons, Ukraine proved to be a difficult case: with its demand for recognition as a lawful successor state of the USSR, a nuclear superpower, the country became a major proliferation concern. And yet by 1994, Ukraine had acceded to the Treaty on the Non-proliferation of Nuclear Weapons (NPT) as a non-nuclear-weapon state and proceeded to transfer its nuclear warheads to Russia, which emerged as the sole nuclear successor of the USSR.

How was this international proliferation crisis averted? Drawing on extensive archival research in the former Soviet Union and the United States, Budjeryn uncovers a fuller and more nuanced narrative of post-Soviet denuclearization. She reconstructs Ukraine's path to nuclear disarmament to understand how its leaders made sense of the nuclear armaments their country inherited. Among the various factors that contributed to Ukraine's nuclear renunciation, including diplomatic pressure from the United States and Russia and domestic economic woes, the NPT stands out as a salient force that provided an international framework for managing the Soviet nuclear collapse.

Mariana Budjeryn (SOUTH BERWICK, ME) is a researcher on the Project on Managing the Atom at the Harvard Kennedy School's Belfer Center.