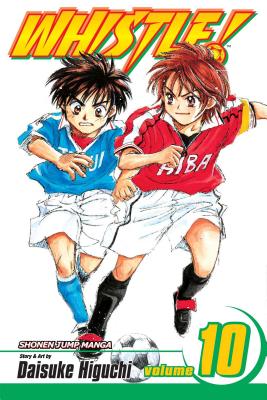 This is book number 10 in the Whistle! series.

Josui makes it to the district finals! When Shô and the others go to scout out their future opponent, the virtually unknown Hiba, they meet team captain Tsubasa Shiina. An informal game breaks out and the key players get to test out each other's mettle. Hiba's defense is strong--stronger than anything Josui's faced before. Does Josui have what it takes to become district champs?
Daisuke Higuchi's manga career began in 1992 when the artist was honored with third prize in the 43rd Osamu Tezuka Award. In that same year, Higuchi debuted as creator of a romantic action story titled Itaru. In 1998, Weekly Shonen Jump began serializing Whistle! Higuchi's realistic soccer manga became an instant hit with readers and eventually inspired an anime series, debuting on Japanese TV in May of 2002. The artist is currently working on yet-to-be-published new series.