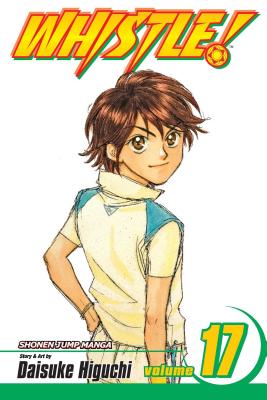 This is book number 17 in the Whistle! series.

The members of the Tokyo Select Team must find out what they are made of as they prepare to take on the Seoul Select Team. Tatsuya is feeling depressed at seeing how much Shô has improved in recent months, while he himself has not. And when Katsurô goes down with a knee injury, Kentarô is thrust into the role of starting goalkeeper. Will the team find the courage to meet the challenge ahead?
Daisuke Higuchi's manga career began in 1992 when the artist was honored with third prize in the 43rd Osamu Tezuka Award. In that same year, Higuchi debuted as creator of a romantic action story titled Itaru. In 1998, Weekly Shonen Jump began serializing Whistle! Higuchi's realistic soccer manga became an instant hit with readers and eventually inspired an anime series, debuting on Japanese TV in May of 2002. The artist is currently working on yet-to-be-published new series.