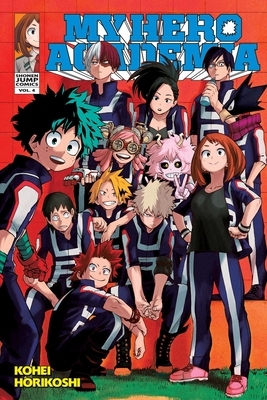 This is book number 4 in the My Hero Academia series.

The U.A. High sports festival is a chance for the budding heroes to show their stuff and find a superhero mentor. The students have already struggled through a grueling preliminary round, but now they have to team up to prove they’re capable of moving on to the next stage. The whole country is watching, and so are the shadowy forces that attacked the academy…
Kohei Horikoshi was born in Aichi, Japan, in 1986. He received a Tezuka Award Honorable Mention in 2006, and after publishing several short stories in Akamaru Jump, his first serialized work in Weekly Shonen Jump was Oumagadoki Zoo in 2010. My Hero Academia is his third series in Weekly Shonen Jump.