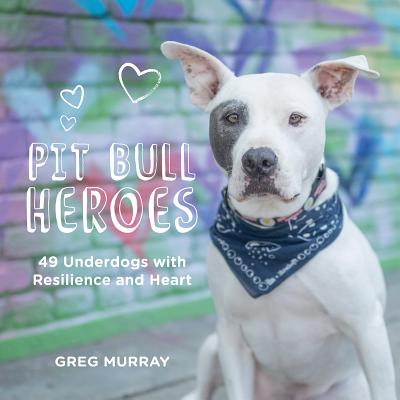 A celebration of pit bulls doing a world of good.

Pit Bull Heroes spotlights forty-nine underdogs who beat the odds and became heroes in their families, neighborhoods, and communities. Meet Chad, found on a street corner, who now serves as the first pit bull in the pet therapy program at Children's Hospital of Philadelphia; Apollo, who finished first in his police training and now sniffs out narcotics at his full-time job in Washington State; and Charlie, who rallied an entire community to fight breed-specific legislation laws in Lakewood, Ohio. All pit bulls; all heroes in their own way.

Animal advocate and photographer Greg Murray captures these pit bull heroes in their day-to-day lives and shares their inspiring stories.

Helpful resources show how you, too, can become an advocate for pit bulls and animal safety in your community.

Greg Murray is an award-winning animal photographer and rescue and pit bull advocate. His first book, Peanut Butter Dogs, is a rollicking portrait collection of more than 140 dogs, many of them pit bulls, enjoying peanut butter. His work has been featured in Huffington Post, Today, Daily Mail, Elle, People, and other media outlets throughout the world. He lives near Cleveland, Ohio, with his wife, Kristen, and two rescue dogs, Leo and Kensie.