Running Dry: A Journey From Source to Sea Down the Colorado River (Hardcover) 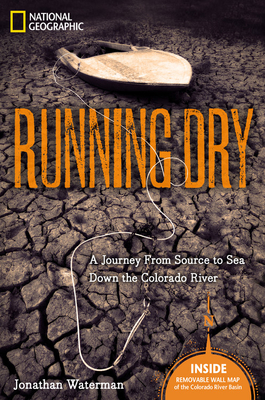 Running Dry: A Journey From Source to Sea Down the Colorado River (Hardcover)


Special Order—Subject to Availability
In 1869, John Wesley Powell led a small party down the Green and Colorado Rivers in a bold attempt to explore the Grand Canyon for the first time. After their monumental expedition, they told of raging rapids, constant danger, and breathtaking natural beauty of the American landscape at its most pristine.

Jon Waterman combines sheer adventure and environmental calamity in this trailblazing cautionary account of his 2008 trip down the overtaxed, drying Colorado. Dammed and tunneled, forced into countless canals, trapped in reservoirs and harnessed for electricity, what once was untamed and free is now humbled, parched, and so yoked to human purposes that in most years it trickles away 100 miles from its oceanic destination.

Waterman writes with informal immediacy in this eye-witness account of the many demands on the Colorado, from irrigating 3.5 million acres of farmland to watering the lawns of Los Angeles. He shows how our profligacy and inexorable climate change spark political conflict, and how we can avert this onrushing ecological crisis. As he follows Powell afloat and afoot, Waterman reaches out both to adventure travelers and to scientists, conservationists, environmentalists, and anyone interested in the fragile interplay between nature and humans.
Jonathan Waterman is the author of nine books, has made four television films, and works as a freelance author and filmmaker. In 2004, his writing about the Arctic won the prestigious National Endowment of the Arts Literary Fellowship.
“An evocative and bold take on a river and what winning the West really means, Waterman’s book epitomizes the best of environmental writing.” –Booklist Starred Review

“…through the author’s eyes we see how everything beautiful and majestic, and difficult and frightening, about the United States in 2010 is carried in the currents of that river. You can’t put it down, and you can’t put it aside, without asking yourself: What should I be doing differently?” –2010 Banff Mountain Book Festival, “Best Book-Adventure Travel”