The Battle of the Crater (Compact Disc) 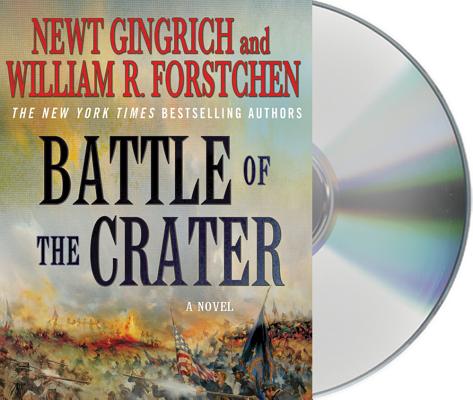 The Battle of the Crater (Compact Disc)

With "The Battle of the Crater," New York Times bestselling authors Newt Gingrich and William R. Forstchen take readers to the center of a nearly forgotten Civil War confrontation, a battle that was filled with controversy and misinterpretation even before the attack began. Drawing on years of research, the authors weave a complex narrative interweaving the high aspirations of African American troops eager to prove themselves in battle and the anxiety of a President who knows the nation cannot bear another major defeat.

June 1864: the Civil War is now into its fourth year of bloody conflict with no end in sight. The armies of the North are stalled in fetid trenches outside of Richmond and Atlanta, and the reelection of Abraham Lincoln to a second term seems doomed to defeat--a defeat that will set off the call for an end to the conflict, dismembering the Union and continuing slavery.

Only one group of volunteers for the Union cause is still eager for battle. Nearly two hundred thousand men of color have swarmed the recruiting stations and are being mobilized into regiments known as the USCTs, the United States Colored Troops. General Ambrose Burnside, a hard luck commander out of favor with his superiors, is one of the few generals eager to bring a division of these new troops into his ranks. He has an ingenious plan to break Fort Pegram, the closest point on the Confederate line, defending Petersburg--the last defense of Richmond--by tunneling forward from the Union position beneath the fort to explode its defenses. Burnside needs the USCTs for one desperate rush that just might bring victory.

The risks are high. Will Burnside be allowed to proceed or will interference from on high doom his plan to failure? The battleground drama unfolds through the eyes of James Reilly--famed artist, correspondent, and friend of Lincoln, who has been employed by the president to be his eyes and ears amongst the men, sending back an honest account of the front. In so doing, he befriends Sergeant Major Garland White of the 28th USCT regiment, an escaped slave and minister preparing his comrades for a frontal assault that will either win the war, or result in their annihilation.

"The Battle of the Crater" is Gingrich and Forstchen's most compelling fact-based work yet, presenting little known truths, long forgotten in the files of correspondence, and the actual court of inquiry held after the attack. The novel draws a new and controversial conclusion while providing a sharp, rousing and harshly realistic view of politics and combat during the darkest year of the Civil War. This must-read work rewrites our understanding of one of the great battles of the war, and the all but forgotten role played by one of the largest formations of African American troops in our nation's history.

NEWT GINGRICH, front-running Republican primary candidate for the 2012 Presidential Election, former Speaker of the House, bestselling author of "Gettysburg" and "Pearl Harbor," the longest serving teacher of the Joint War Fighting Course for Major Generals at Air University, and an honorary Distinguished Visiting Scholar and Professor at the National Defense University. He resides in Virginia with his wife, Callista, with whom he hosts and produces documentaries, including their latest, "A City Upon A Hill." WILLIAM R. FORSTCHEN, Ph.D., is a Faculty Fellow at Montreat College in Montreat, North Carolina. He received his doctorate from Purdue University and is the author of more than forty books. Forstchen's doctoral dissertation on the 28th USCT was one of the first in depth studies of a USCT regiment. He is the "New York Times" best selling author of "One Second After," published by Tor/Forge. He resides near Asheville, North Carolina, with his daughter, Meghan.WILLIAM DUFRIS has been nominated six times as a finalist for the APA's prestigious Audie Awards. He garnered eighteen Golden Earphones Awards through "AudioFile" magazine, which honored him as one of "The Best Voices At The End Of The Century." Of his work, "AudioFile" magazine said, "William Dufris commands a dazzling array of voices that bring to life the dozens of audiobooks he's narrated." His other narrations include Newt Gingrich and William R. Forstchen, Ph.D.'s "Days of Infamy "and "Pearl Harbor," Tom Perrota's "Nine Inches, "and John Scalzi's "The Human Division."

“William Dufris reads with a soft-spoken weariness that conveys the misery of war…His character voices are so natural that the production sounds like it has a full cast at times.” – AudioFile Magazine